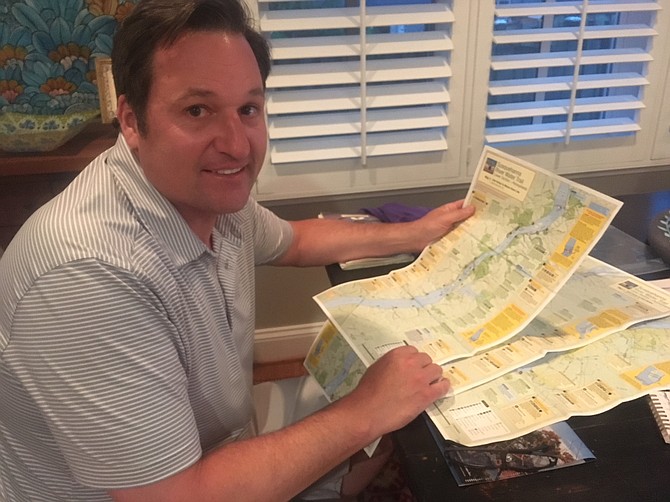 According to the Alzheimer’s Association, there are 140,000 people in Virginia aged 65 and older with Alzheimer’s and that number is expected to reach 190,000 in 2025.

Two years ago, Greg Joachim stood on his grandmother’s porch in Milton, Pa. and looked out on the Susquehanna River and felt that, with the family connection with the river and his grandmother’s condition with Alzheimer’s, something needed to be done.

That’s when he hatched the plan for a fundraising canoe trip that would challenge him and earn over $14,000 for the Alzheimer’s Association that could lead to a cure one day.

“That river was always part of our lives, maybe we could do something,” he said.

Joachim, a former U.S. Army officer and current Mount Vernon resident, enlisted the help of Ron Miller and Minter Jackson, two fellow Army buddies, and embarked on a 140-mile canoe trip down the Susquehanna River from Milton to Havre de Grace in Maryland, where the river empties into the Chesapeake Bay. The trip they named the “Barn to Bay Paddle,” was over Memorial Day weekend, and was a challenge and an achievement for the trio. “We accomplished what we set out to do,” Joachim said.

The fundraising aspect of the trip was more structured than fundraisers of past years. Joachim reached out to the Alzheimer’s Association through its website and became part of its yearly effort called “The Longest Day,” which culminates on June 21, which is the longest day of the year and major Alzheimer’s Association event. Joachim used social media to reach out to friends and neighbors in Mount Vernon, and that’s where a majority of the donations came from. Everything was online, so there was no door knocking, or cash to collect.

Cindy Leach Schelhorn, the senior director of communications and marketing at the Alzheimer’s Association National Capital Area Chapter in McLean, worked with Joachim early on. Throughout the year, they work with fundraising efforts like this but most aren’t as fiscally challenging as a 140-mile canoe trip. Other fundraising efforts come in the form of bridge game marathons, art, karaoke or blackberry pie bake-a-thons. They encourage “doing something that’s special to you,” Schelhorn said. Their trip was formally named the “Barn to Bay Paddle.” On June 1, it ranked ninth in the nation for fundraising levels at the Alzheimer’s Association.

The Susquehanna River was special to Joachim because his grandmother lives right on the river and his parents got married at a riverside venue too. It was “doing something that they love for someone they love,” Schelhorn said. The money raised goes toward development, the fundraising team, educational programs, support groups and the Alzheimer’s Association’s 24-hour help line. “Research is critical,” Schelhorn said.

A 140-mile trip down a river isn’t done on a whim though, and being Army officers, planning made a major impact on the trip’s success. Joachim got in touch with the State of Pennsylvania, who supplied him with detailed maps, and there were dams, campgrounds, still water, rapids and scenery to take in. “A lot of bald eagles,” Joachim said.

A little pre-trip canoe research was another key to their success and each was outfitted with “Mirage Drive,” kayaks that also had a pedal mechanism to propel them forward. They traveled to Uganda in Africa to work with Miller who was stationed there with the Army and canoed in Lake Victoria. On the Potomac River, Miller and Joachim used the 22-mile stretch of river between Great Falls and Mount Vernon as their training grounds. Jackson didn’t decide to do the trip until mid-May. “Minter jumped in in the last four days; he was looking for an adventure,” Joachim said.

On Day 1, they hit the Shamokin Dam and “had to pass the boats over a flood wall,” before meeting up with their families for a barbecue that evening. Even though they packed tents, they only used them one night. There was a friend’s camper, a hotel, and other unplanned places where “river magic” brought them food and rest.

It was comparable to “trail magic,” events that happen while hiking the Appalachian Trail. “Everybody’s generosity along the way was great,” Joachim said.

There were a few other dams, but they called ahead and got the dam crew to drive them around the dam, and in town, an unplanned stop at a restaurant paid off. “We found a nice Italian place,” Joachim said. They brought some military “meals-ready-to-eat,” but only dug into them once or twice. Day 2, at Rick’s Campground, they could see Three Mile Island nuclear power plant across the river.

They got to Havre De Grace as planned, and Joachim’s wife Wendy was there waiting for the group. “It was tiring but it was a lot of fun and rewarding,” he said.