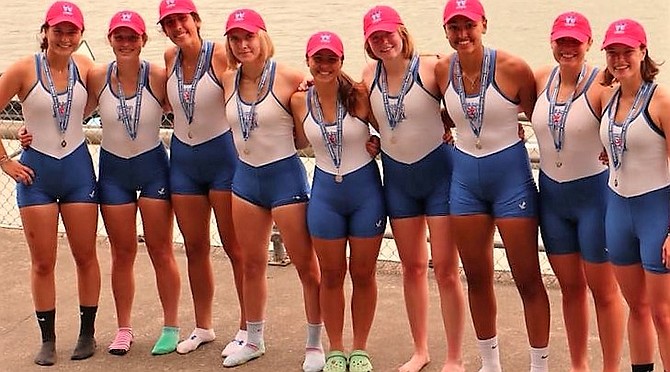 The T.C. Williams Crew Team closed its 2018 Spring season on June 1-3 at the Canadian Secondary Schools Rowing Association’s 73rd Annual Championship Regatta, generally known as the Canadian Nationals, in St. Catharines, Ontario. The Canadian Nationals are open to any high school team from around the world, and typically draws the best boats in Canada, including strong teams from as far as Vancouver, and a few U.S. teams.

This premier regatta provides T.C. rowers with a taste of international and collegiate rowing. The course is a collegiate-level 2000 meters instead of the U.S. high school standard 1500 meters, the coxswains must weigh a minimum of 45 kilograms (99 pounds) or carry a deadweight in the boat to even the competition, and the use of metric weights means the maximum weights for rowers in lightweight boats differ from the U.S. standards.

“We gave it all to the end,” he continued. “Our boat jumped up at the start and was leading up to the [last] 500 meters, when E.L. Crossley took the lead and held it to the finish, withstanding the charges from the Titans by 1 second. I take my hat off to the Crossley rowers and coaches, and I am very proud of the T.C. Women’s performance.”

In addition to the Women’s First 8, the Titans brought three men’s and two other women’s boats to Canada, and also deployed a few of the men to row in additional boats, entering a total of nine different categories. The Virginia State Champion T.C. Men’s First 4 rowed their way from Friday heats to Saturday semi-finals, and two hours before that race, First 4 seniors Stefanos Psaltis-Ivanis and Connor McGivern also rowed for the first time as a pair – two rowers with one oar each – after only two days of practice. They finished 8th, just missing the finals against experienced pair boats that rowed all season and that were equipped with toe steering, an important feature for pairs racing.