Cappies: The Next Theatrical Generation Takes the Stage
Votes

Cappies: The Next Theatrical Generation Takes the Stage 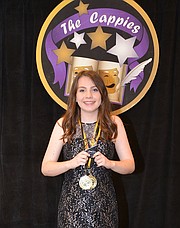 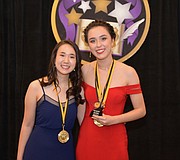 From left, Ashley Winegarden and Kristen Waagner. The duo won for their choreography for the McLean High School’s production of “9-5: The Musical.” 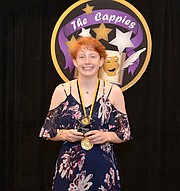 Abby Comey’s performance in McLean High School’s production of “9-5: The Musical” won her the top prize for a Comic Actress in a Musical. 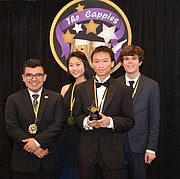 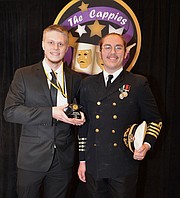 That “Titanic” production must have been something. From left, JD Mayer and Diego Maldonado took home the Special Effects and/or Technology Award. 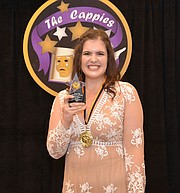 Mely Megahead from South Lakes High School scored for Supporting Actress in a Musical, for her role in “The Phantom of the Opera.” 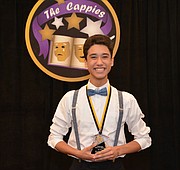 Robinson High School’s Nico Ochoa won best Supporting Actor in a Musical for his part in their production of “Monty Python’s Spamalot.” 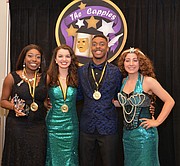 The Lead Actor in a Musical Award went to Annandale High School student Kyle Dalsimer for his work in “The Hunchback of Notre Dame.”

“Lead Players” Erich DeCinzo, Phil Reid, and Diane Poirier, together with hosts — and Cappies Governing Board members — Judy Bowns and Janie Strauss kept things moving along with abundant witty repartee throughout the three-hour event. With musical numbers and dramatic scenes performed by cast members from some of the Cappies nominated shows, audience enthusiasm never waned, from the opening number “Come On, Get Cappies,” (sung to the tune of “Get Happy,” written by Harold Arlen and Ted Koehler, and adapted by Judy Garland as one of her signature songs) to the show-stopping finale, featuring a number composed by long-time Cappies musical director, Chris Johnston, who teaches musical composition at the Fairfax Academy for Communications and the Arts, when not conducting the Annandale Northern Virginia Community College Symphony Orchestra.

AWARDS were presented in 39 categories, ranging from actors/actresses in lead and supporting roles in plays and musicals, vocalists, costumes, choreography, orchestra, technical arts such as Lighting, Sets and Sounds and many more.

Kyle Dalsimer from Annandale High School was named best in the Lead Actor in a Musical category for his performance in “The Hunchback of Notre Dame.”

The Oakton HS “Titanic Band” was tops in Orchestra.

Olympia Hatzilambrou must have wowed as the Female Vocalist in Thomas Jefferson High School for Science and Technology’s “Mary Poppins.”

John Henry Stamper from Westfield High School in Chantilly took the top Male Vocalist honors as the “Phantom of the Opera.”

And the award for Musical of the Year went to Robinson Secondary School for their production of “Monty Python’s Spamalot.” The audience was treated to the song “Knights of the Round Table” by the Robinson crew early in the program.

THE LIST of talented young winners in the region goes on – and can be found on the Cappies website www.cappies.com/nca.

The Cappies were established in the wake of the Columbine High School massacre in 1997. The vision of the late William Strauss, co-founder of the Capitol Steps political satire review, and brought to life with his partnership with Judy Bowns, the Cappies began as an effort to “bring positive attention to teenagers engaged in creative pursuits.”

Their mission has expanded to include opportunities for constructive critical feedback for the theatrical activities of those youth, to honor the advisors, mentors, and teachers, as well as the students, and to provide a truly unique collaborative learning experience for high school theatre students.

The nonprofit organization has also expanded outside of the immediate area in those nineteen years, adding nine chapters around the country, and an additional three in Canada.

•Comic Actress in a Musical, Abby Comey, 9 to 5 the Musical, McLean High School