Putting a Lid on Every Kid in Herndon
Votes

Putting a Lid on Every Kid in Herndon 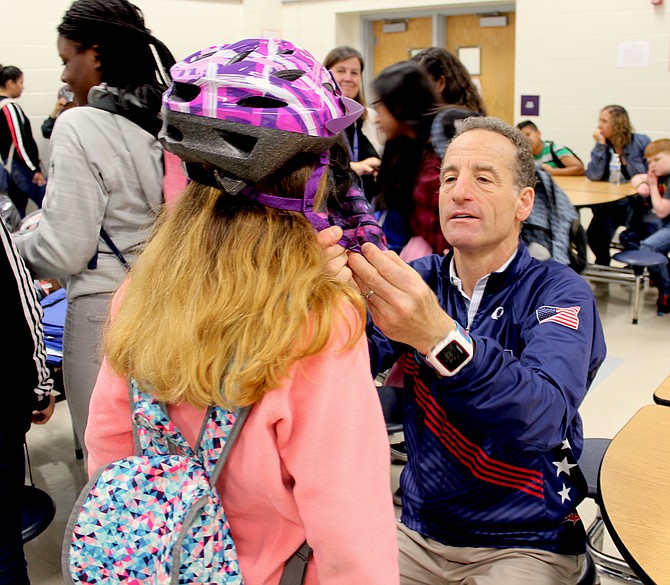 On Monday afternoon, the entire sixth grade class at Hutchison Elementary School in Herndon was protected from unnecessary brain injury. Police officers from the Fairfax County Bike Unit, together with Del. Jennifer Boysko (D-86) and local attorney Doug Landau, made sure that each student learned about head injury prevention and received a new, free Bell bike helmet along with safety information.

Attorney Landau of the Abrams Landau law firm in the historic district of Herndon let the students touch helmets that had actually been in accidents, showed them what a cracked, aging or defective helmet looks like and even let them touch models of the human brain. Landau has been going to local Fairfax and Loudoun County public schools for over a decade with his Lids on Kids brain injury prevention and free helmet distribution program.

Having the police officers present not only ensured that each student would be quickly fitted with their helmet, but also enabled law enforcement to interact with these young students on a personal level. Delegate Boysko shared a personal note, discussing the change in Virginia law that seeks to prevent bicycle riders from getting "doored." In other words, when people park their cars in bicycle lanes and don't look to see who is coming, they may open the door to their car and take out a cyclist without any warning.

DEL. BOYSKO told the students that this commonsense piece of legislation required a bit of a fight, but its passage will make the roadway safer for them and their friends to ride their bikes to school, work and elsewhere.

Hutchison Elementary School principal Ray Lonnett also provided vital assistance. He has sought to protect the students at his school ever since his arrival. He and attorney Landau have removed dangerous articles from the sports field around the school, and they've also trained together across street at Worldgate. Lonnett was instrumental in helping to make the program a success by working with the faculty that were present to keep the lines of children moving and getting the right helmet sizes on each child. Principal Lonnett also emphasized how important it was for the children to develop good habits, physical fitness and safe cycling habits.

Lawyer Landau has competed as a member of TeamUSA at the Multisport World Championships. He is frequently on the podium of spring triathlons, duathlons and local running races. Currently training for the World Duathlon Championships and then the US National Triathlon Championships later this summer, Landau frequently trains on the fields around Hutchison Elementary School as well as the Herndon Community Center.

His law office building, on the corner of Station and Center Streets, are well known to members of the northern Virginia bicycle community as he has represented injured bikers for over three decades. Landau has helped those who were struck by cars, attacked by dogs and those who had been injured by defective sports products.

The Abrams Landau building is more than 100 years old. Enjoying the last 20 years that he has owned the corner, Landau and his team have tried to help cyclists, runners and other sports enthusiasts throughout the East Coast.

IN ADDITION TO TRAINING on the local turf fields, Landau regularly rides on the W&OD trail and streets of Herndon. "I've seen too many accidents and near misses to think that it would ever make sense not to ride a bicycle without a helmet. Having sustained a double concussion myself over at Worldgate, I know firsthand what it's like to struggle to recover and to get well. My goal is to put a lid on every kid who could not otherwise afford it, and that is why we visit schools like Hutchison, Herndon, Guilford Elementary School, and others. It's a win-win situation. If a child without a helmet and insurance suffers a traumatic brain injury, then everyone has to pay. I would rather pay to protect the children on the front end, than to pay many times more on the backend for a child who may never get well," said Landau. If you know of a school that is part of the subsidized meal program that could benefit from the Abrams Landau Lids on Kids brain injury prevention and free helmet distribution program, let his office know by calling 703-796-9555.