Doug Landau heads to World Championships in Almere-Amsterdam in the Netherlands. 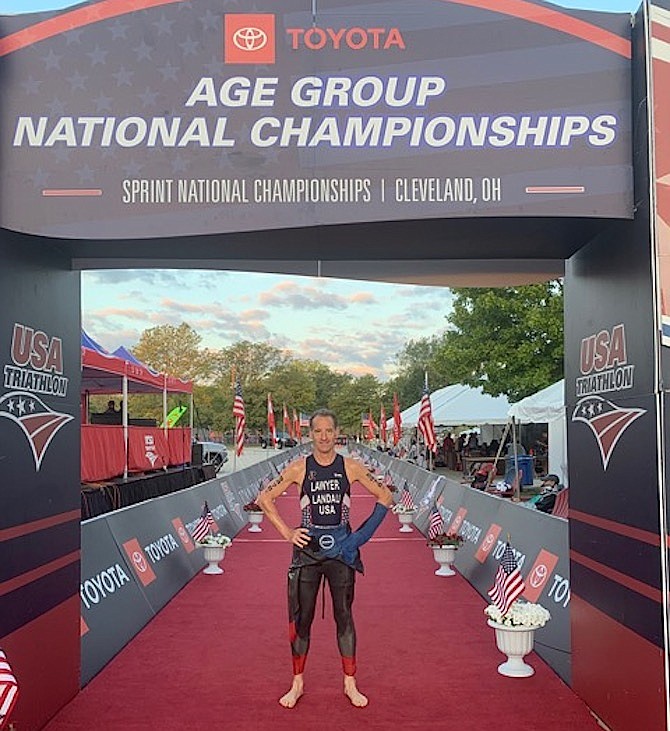 Representing Herndon throughout the United States in national and regional championship Triathlon, Duathlon and Road Running competitions, attorney Doug Landau of the Herndon law firm Abrams Landau, Ltd. has again qualified to represent the entire country as a member of TeamUSA at next year’s World Championships. Lawyer Landau just returned from the USAT Age Group National Championships in Cleveland, Ohio, has competed at prior sprint Duathlon World Championships in Adelaide Australia and Penticton, Canada. Landau focuses his athletic training on sprint triathlons, which require athletes to swim, bike and then run, as well as duathlons, which usually follow a “run-bike-run” format. The Abrams Landau law firm’s location, just off the 20-mile marker of the W&OD Trail by the Herndon caboose and Municipal Center, makes for an ideal location from which to bike on the paved path and run on the cinder horse trail or nearby turf fields.

“When we bought our buildings here on the corner of Station and Center Streets in the Historic District of Herndon, we knew about the trails, but the Green Lizard Bike Shop was not there, nor did we know that the Reston Bike Club rides would leave from the municipal lot down the block. Our law office building’s Herndon location is perfect for training for multisport competition.”

The 2020 ITU Sprint Distance Duathlon World Championships will be contested in Almere-Amsterdam in the Netherlands. Landau has raced successfully in a number of countries and half of the states in the USA so far. Because he is licensed to practice law in states from Florida to Connecticut along the East Coast, he is often able to combine helping injured clients, teaching and racing when he is on the road. Landau quips, “Wherever I travel, it’s cases, races, places and faces (of friends, family, clients, co-counsel). Once I know I am going somewhere for a race or a case, I try to see what place I want to visit and who I may already know or want to meet there.”

As a member of the TeamUSA at the Maccabiah Games in Israel, Landau was the only gold medalist for the United States in Triathlon. Recently, he won his age group at the USAT Mid-Atlantic Sprint Triathlon Championships in Bear, Del. He was also an age group winner at the 2019 Maryland Sprint Duathlon and the New York City Central Park Duathlon, each by over a mile!

Because he believes that giving back to the sport and the community is important, in addition to being a volunteer at races, Reston Bike Club events and providing free bike helmets through his Lids on Kids program to school children in the Town of Herndon, Fairfax and Loudoun counties in order to prevent needless brain injuries and skull fractures, Landau is a sponsor of the Kinetic Multisports Virginia and Maryland Triathlon series of 36 races throughout the region.

“As a number of my clients are injured cyclists, runners, and recreational athletes, they appreciate that I can ‘walk the walk,’ and not just ‘talk the talk.’ Our disabled clients and their families will come and cheer me on at races, and in some way, I feel as though I am running and racing for them.”