Anderson and Blackburn Opening Another Restaurant in Alexandria?
Votes

Anderson and Blackburn Opening Another Restaurant in Alexandria? 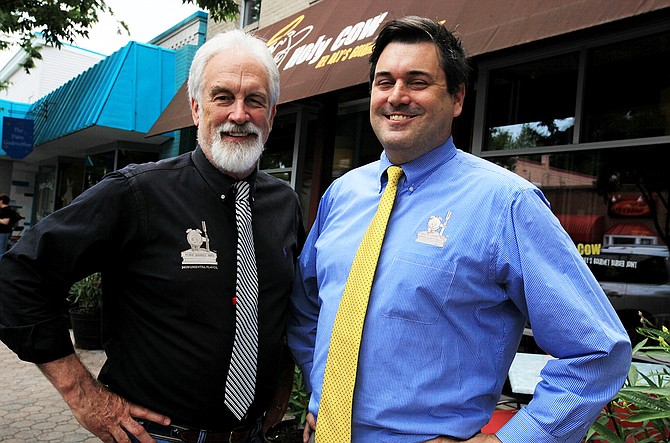 It’s not really a father-son thing with restaurant partners Mike Anderson and Bill Blackburn. It’s more like they’re brothers or best friends who own a bunch of restaurants in Alexandria. They own five Alexandria restaurants in their Homegrown Restaurant Group and are planning on opening the sixth — Whisky and Oyster at 333 John Carlyle St. — by Labor Day. Still, despite their success, the pair have no ambition to open any businesses outside Alexandria.

“We’re down to earth, we’re neighborhood guys,” Anderson said. “We’re not in the heart of Georgetown. We ask what the neighborhood needs and we give it to them. It’s not a complicated formula. We’re not complicated guys, and the whole premise is good food, good service, priced right, a clean place and in a nice location. But the trouble is that the execution of that is really hard.”

Each have won awards and honors from the Alexandria Chamber of Commerce, the Del Ray Business Association and Restaurant Association of Metropolitan Washington Awards, to name a few. They employ hundreds of employees and own Pork Barrel BBQ, Holy Cow and The Sushi Bar on Mount Vernon Ave. in Del Ray, and Tequila and Taco and Sweet Fire Donna’s on John Carlyle Street near the U.S. Patent and Trademark Office.

Earlier this month, the pair celebrated another milestone of sorts by raising $100,000 for 75 Alexandria charities with their seven-year-old burger joint “Holy Cow” in Del Ray. The restaurant donates 25 cents per burger to charity — the funds of which are distributed by ACT for Alexandria. That means over 400,000 quarters have been doled out to such charities as the Animal Welfare League of Alexandria, Inova Alexandria Hospital and Together We Bake.

“At first we thought, what’s a quarter?” Anderson said. “Those quarters are like a mortgage payment every month. I never thought they would add up so much.”

Anderson, 69, a native of Detroit, Mich., moved to Alexandria after graduating college in 1972. He opened his first restaurant, Shooter McGee’s, in 1979, followed by the original Joe Theismann’s Restaurant in Bailey’s Crossroads and then Mango Mike’s, which he owned for 20 years until it closed in 2013. His wife, Donna, is the driving force behind Sweet Fire Donna’s, and their three daughters were raised in the industry.

Blackburn, 40, a native of St. Louis, Mo., wanted a break from the real world and started working at Mango Mike’s after graduating with a business degree from The George Washington University in 2000. He is married to Megan Blackburn and has a young daughter with a son due in August.

“I worked at some bars in college, and I said I was going to take a break from real jobs and work in restaurants for a year,” Blackburn said. “I still haven’t gotten a real job.”

Blackburn bartended for five years at Mango Mike’s until Anderson had a tough choice to make — fire his best bartender or give him a chance by making him a business partner.

“I took him to dinner one night, and I said, ‘Bill, I have to let you go,’” Anderson recalled. “I told him to either get a real job, or if he liked the restaurant business to get more experience in the back of the house to get his own place. So, then I told him I was making him GM of Mango Mike’s. I said if he did a good job that in a couple years I’d look around to see if I could find us a good brick and mortar and we’d do a barbecue joint and I’d give him a piece of the action.”

What’s next for Homegrown Restaurant Group? Anderson and Blackburn haven’t made up their minds, but they’re open.

“We like doing business in Alexandria. We piss and moan about the processes and the food tax, but we both live in Alexandria,” Anderson said. “Bill lives down the street, and I’ve lived in the same house in the West End for over 40 years, and we’ve both gotten opportunities to move into D.C., and probably have made a lot more money, but I don’t think we’ll ever have a place outside of Alexandria.”

Blackburn said that he and Anderson have always shared an attitude of conducting a fair business.

“He’s my mentor and he’s taught me a lot,” Blackburn said. “We do the right thing, from dealing with customers and vendors and employees. It’s easy to get along with your business partner if your philosophy is the same, and business at all of our joints is real strong.”