Spicy Tuna Rolls for a Good Cause in Arlington
Votes

Spicy Tuna Rolls for a Good Cause in Arlington

Sushi Zen completes goal of 20 fundraisers in a year. 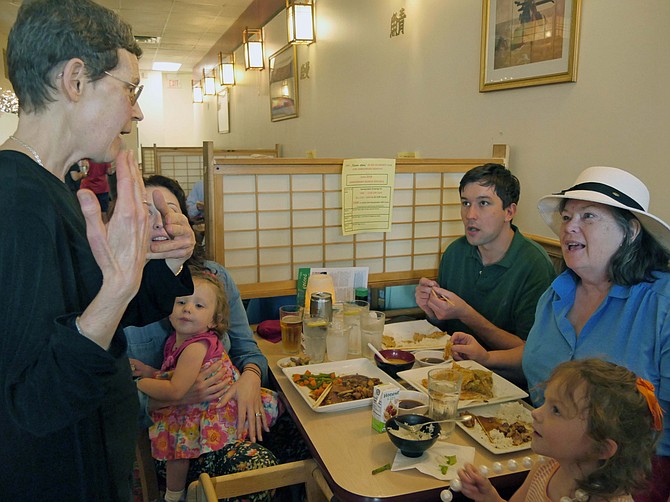 Rosie Gordon-Mochizuki chats with three generations of the Almand family who have gathered at Sushi Zen on June 20 to celebrate the 20th fundraiser of the year. This fundraiser is for Arlington Neighborhood Village (ANV). Elizabeth Haire Almand explains that she and her son Peter Reijmers came from Charlottesville to visit her daughter and two grandchildren, Arden and Emily, in Arlington. She says when she asked her son to choose where to eat, "the answer was immediately Sushi Zen." Photo by Shirley Ruhe. 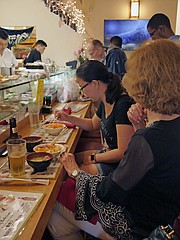 Customers click chopsticks over shrimp tempura or sip hot miso soup at Sushi Zen on Wednesday, June 20 as they support Arlington Neighborhood Villages. ANV will get a percent of each meal purchased that evening.

Wendy Zenker, executive director, and Maureen Markham, secretary on the board of directors of Arlington Neighborhood Villages, greet diners outside of Sushi Zen at the fundraiser June 20.

It is June 20, and one year of Sushi Zen fundraisers is about to be completed. Rosie Gordon-Mochizuki, co-owner of Sushi Zen with her husband Shoji Mochizuki, says they decided to host 20 fundraisers in a year for different non-profit organizations, to celebrate their 20 years in business in Arlington. They started with Educational Theatre in June 2017. They have now reached their goal of 20 with Arlington Neighborhood Village (ANV).

A crowd gathers on the sidewalk outside the restaurant in the Harrison Shopping Mall waiting for an open table as ANV volunteers explain the purpose of the organization. Wendy Zenker, executive director of ANV, explains the goal is to provide services that help neighbors age in place. "We want to help people stay at home as long as possible."

She says the organization has 215 members who pay for the ANV services and 200 volunteers who provide those services. The volunteers have a whole series of skills and "they assist with everything from rides to doctor's appointments to 'Teeter' runs to what my mother would have called 'the beauty ball.' You know some people still go for their weekly beauty appointment." Also changing light bulbs. "People shouldn't be up on a ladder."

Donna Pastore, the president of the ANV board, who is there with her sight support dog, explains that Zenker introduced her to Wegmans. And Zenker explains when a tree fell on Pastore's house during that big storm, she helped find Pastore a hotel and a contractor with a tree company.

Gail Kutner is one of the founding members who helped ANV get started four years ago. She says that although this concept of neighborhood villages is nationwide, there are different kinds of villages and each one is unique. ANV covers the whole county. She recalls once helping wrap Christmas presents for one of the members. "But one of the best things of all: we make so many good friends. It's a big part of my life."

Gordon-Mochizuki says, "As for Sushi Zen, I thought I might just do a dozen fundraisers next year, but now I think I might just try for 21. There are so many great organizations out there."