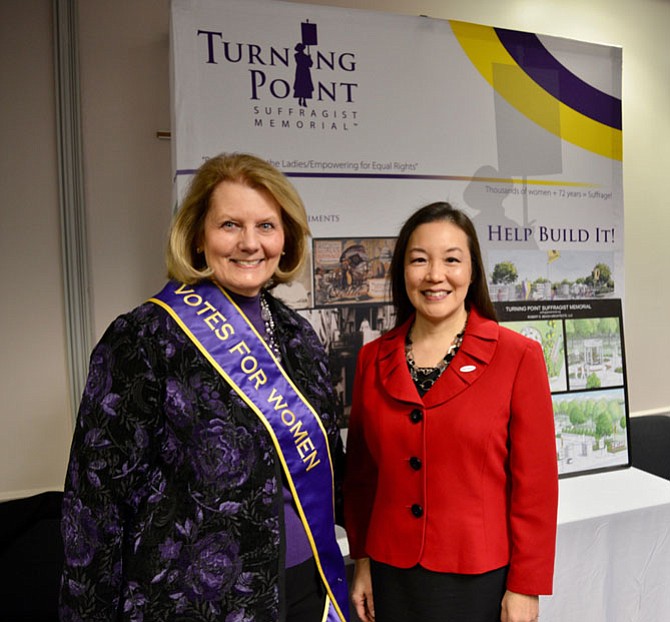 From left: Patricia Depew Wirth, executive director of the Turning Point Suffragist Memorial organization, and Herndon Town Council member and Commission for Women 2018 honoree Grace Cunningham in front of the display highlighting the designs for the national memorial planned for suffragists, to be built in the Occoquan Regional Park in Lorton. Photo by Andrea Worker. 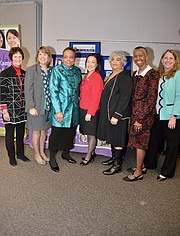 At its March 6 meeting, the Fairfax County Board of Supervisors presents a proclamation, declaring March 2018 to be Women’s History Month.

March is Women’s History Month, and the theme for this year’s celebrations is “Nevertheless, She Persisted,” referring to the now-famous phrase that was part of Republican Senate Majority Leader Mitch McConnell’s rebuke of Democratic Sen. Elizabeth Warren of Massachusetts in February of 2017 after a party-line vote to stop Warren’s speech against the appointment of Sen. Jeff Sessions as the U.S. attorney general.

“Sen. Warren was giving a lengthy speech,” said McConnell at the time. “She had appeared to violate the rule[s]. She was warned … nevertheless, she persisted.”

Since then, that phrase has become a rallying cry for women’s rights advocates and others around the world, and is a fitting description for the women chosen by the Fairfax County Commission for Women as their 2018 honorees, according to Michelle Mueller, the county’s liaison to the commission, who led the program at the commission’s reception on March 6 at the Government Center.

The women selected as this year’s recipients for recognition by the county “have exemplified that persistence,” said Mueller in her remarks, especially in their work to “fight all forms of discrimination against women.”

Assisting Michelle Mueller in presenting certificates to the honorees were Fairfax County Board of Supervisors Chairman Sharon Bulova, and Hunter Mill District Supervisor Cathy Hudgins. At the regular Board of Supervisors’ Meeting which followed the reception, Bulova presented a proclamation, accepted on behalf of the Commission for Women by Cunningham, declaring March 2018 as “Women’s History Month, and a time to honor all women who continue to fight and succeed in bringing positive change to the lives of diverse American Women.”

ACKNOWLEDGING THE WOMEN who sacrificed in the past to gain the opportunity for women of today to succeed, the reception also included a display of the planned Turning Point Suffragist Memorial, a garden-based memorial to be located within the Occoquan Regional Park in Lorton — once part of the prison grounds where women suffragists were incarcerated.

Executive Director of Turning Point Patricia Wirth was on hand to showcase the drawings of the memorial and remind attendees of the contributions of the women “who came before us.” Wirth says they still haven’t raised all the funds needed to build the national memorial, but declared that regardless of what phase of achievement has been reached by that time, “there’s going to be an unveiling event on Aug. 26, 2020.”

Cunningham vowed to “put pressure on my colleagues to donate to the fundraising efforts for the memorial. We are so fortunate to live in amazing Fairfax County,” said Cunningham, “where we have a woman as our Board of Supervisors chair, a woman chair for the public school board, mayors like Lisa Merkel of Herndon, women serving our area in the state legislature and so many more, unlike many other jurisdictions across our region and the country — and we wouldn’t have this opportunity without these women who sacrificed to get women the right to vote.”

For more about Women’s History Month and the Commission for Women, see www.fairfaxcounty.gov/cfw. The Turning Point Suffragist Memorial Association has a Facebook page and information on www.suffragistmemorial.org. A public Women’s History Month Celebration is scheduled for Saturday, March 17 from 1:30 – 4:40 p.m. at Thomas Jefferson High School for Science and Technology in Alexandria. Those interested in attending can RSVP and purchase the $7 tickets at www.womens-history-month-2018.eventbrite.com.