A Penny Borrowed in Alexandria
Votes

A Penny Borrowed in Alexandria

City to expand borrowing for capital needs, but mindful of credit rating, other impacts. 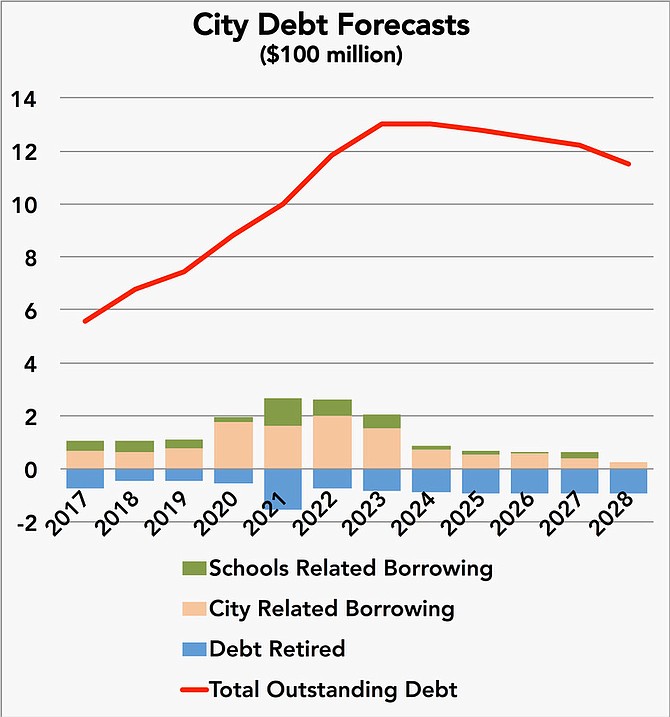 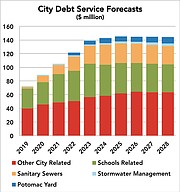 To finance capital projects, the city plans to increase borrowing, growing its outstanding debt by 55 percent between FY19 and FY28, while still retaining favorable bond ratings.

The city faces major capital needs, especially with respect to aging sewers, schools, city facilities and transit. This year, the city plans to finance about half of its 10-year Capital Improvement Program (CIP) through general obligation debt, backed by the “full faith and credit” of the city, and half through cash. This “greatly exceeds the very healthy level of 25 [percent]” cash funding, reflecting “the City’s commitment to … keep its debt at reasonable AAA/Aaa [credit rating] levels,” according the the city manager’s CIP proposal.

“The City has historically issued all debt as general obligation debt, regardless of the source of payment,” according to a March 14 budget memo. “The City has the option to secure revenue-backed bonds for Sanitary Sewer and Stormwater Management projects, but opts against this as the revenue-backed bonds would not have as advantageous a bond rating …. By issuing Sanitary and Storm Sewer bonds with a general obligation (GO) pledge even though there is a user-fee generated revenue stream, the City achieves the lowest interest rates possible.”

On the one hand, the city could issue much more debt than it plans to. The only restriction the Commonwealth places on the city is that its outstanding debt must not exceed 10 percent of its total assessed real property value. Yet, including all outstanding debt forecasted over the next decade, that ratio for the city rises no higher than about 3 percent. In its calculation the city excludes sewer and stormwater debt — which it plans to pay with fees rather than taxes — such that the ratio never exceeds the self-imposed limit of 2.5 percent.

“It is an important indicator of the City’s ability to repay debt because real property taxes are the primary source of the City’s revenues used to repay debt. A small ratio is an indication that the City will be better able to withstand possible future economic downturns and continue to meet its debt obligations,” according to the budget memo.

By 2028, the city forecasts the total value of taxable real property to increase by about a third to nearly $53 billion. Taxes from certain utilities and railroads, which aren’t assessed locally, would boost that figure a little higher.

In practice over the past 10 years, keeping debt as a percentage of the tax base low has meant leaving as much as $3.3 billion in untapped legal debt capacity.

“The only way to pay for [more debt service] is to increase taxes/fees or reduce something else,” said Kendel Taylor, the city’s finance director, in an email.

As it is, total debt service will double, from $72 million in FY19 to $144 million in FY28. Most of this will come from the city’s General Fund. Additionally, once projects are built, it costs money for maintenance, staff, utilities, etc. to keep them up and running. The city’s capital projects will have an estimated $2 million operating impact in FY19, rising to $11 million in FY28, according to the CIP proposal. That doesn’t including the operating impact of the schools’ projects.

Overall, according the CIP proposal, the city’s more stringent self-imposed debt limits: “(1) accommodate the City’s current capital needs, (2) give the City the flexibility to meet future/unanticipated capital needs, and (3) maintain a fiscally moderate position for the City that is in line with regional comparators and what bond rating agencies would view as acceptable.”

Find all budget materials at www.alexandriava.gov/budget.