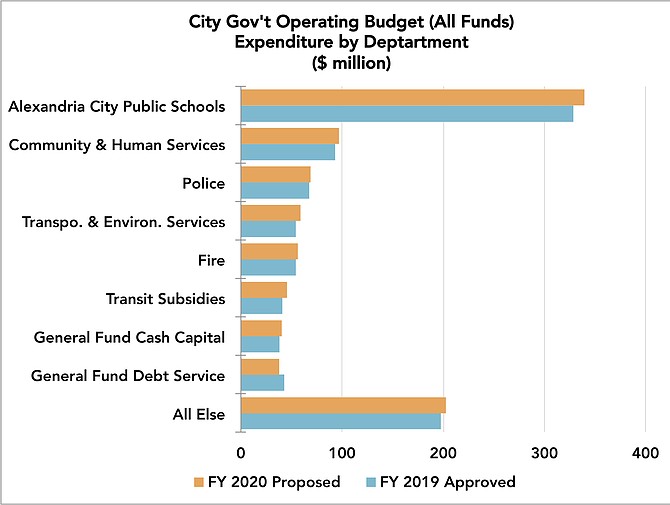 The city manager’s proposed FY 2020 operating budget, including all funds, weighs in at $947 million (3.2 percent over FY 2019). Of that, the discretionary General Fund budget accounts for $761 million (1.7 percent over FY 2019). Of the FY 2020 all-funds proposal, the public school system accounts for 36 percent of expenditures; the next 7 largest departments/categories combined account for 43 percent; the remaining 35 departments/categories combined account for 21 percent. Source: City of Alexandria FY 2020 Proposed Budget, Total Sources & Uses Summary Tables

In November, Jinks’ administration said it faced an initial budget shortfall of $28 million. This continued a trend of expenditures outpacing revenues, with the city each year having to “solve for the gap,” as Morgan Routt, the city’s budget director, said. Jinks and his staff subsequently did just that, solving for the FY 2020 gap to propose a balanced budget, as is statutorily required. They did so through a combination of a revised funding request from the public school system, boosted property tax assessments, departmental savings, increased cost recovery/collections and other revised forecasts. But the underlying problem hasn’t gone away.

“The city’s revenue and expenditure growth rates are projected to be structurally out of balance starting in FY 2021,” according to Jinks’ budget document. At current tax rates, a $27 million imbalance in FY 2021 would grow to an estimated $75 million by FY 2024, driven especially by school debt service.

Jinks says some combination of the following would comprise a structural fix to the structural problem:

Aside from real estate and personal property tax rates, many other tax rates for major revenue sources already sit at state-imposed maximum limits. Exceptions include tax rates on electric and natural gas utility consumption, renting of residential and commercial property, and gross receipts of financial services businesses, which are below state caps.

Council members didn’t respond to a request for comment about what they think might comprise a structural fix, and what obstacles they think primarily stand in the way.

Jinks proposes an overall mix of 46 percent cash and 54 percent bonds over the next decade to pay for it all. That represents a relatively conservative approach to debt financing, by which the city government aims especially to maintain its top-level credit ratings, preserving its ability to borrow on favorable terms.

“The city’s … cash capital level of 46 percent greatly exceeds the very healthy level of 25 percent,” which is the city’s general rule of thumb, according to the budget document.

Additionally, while paying off 50 percent of debt after 10 years “is typically viewed favorably and as best practice for municipal debt management,” the city forecasts a 10-year payout ratio of 75 percent.

“We are a city that has almost a phobia about debt,” said Elliot Branch while part of a budget advisory task force in 2017. But debt can be a “philosophical” choice. By sharing in debt service payments, “taxpayers who live here 10 years from now, who are going to reap the benefits of what we decide to build, will share the burden,” he said.

Asked why the city doesn’t take on more debt, Routt said: “For next year we see the possibility of significant [cost] increases due to construction labor and materials cost inflation and more specifics related to the high school [capacity expansion] project. For that reason, and the fact that we will be looking at the issue of creating a separate tax rate for school capital, we left the financing plan largely unchanged for this year recognizing that we may need to look at more bonding of projects in the next [10-year capital budget].”

This year, the city government has incorporated a new method — called Priority Based Budgeting — of representing and comparing costs more consistently across departments and services. The method aims to identify areas from which the city might reallocate existing funds, before imposing more taxes as a last resort.

Inter-departmental staff teams assigned numerical composite scores and rankings to over 500 city services. Higher scores went to services that are mandated by the state or feds; serve many residents; offset their costs through, for example, user fees; and rely on city government for their provision. Lower scores went to services that are locally self-imposed; serve fewer residents; generate little or no cost-recovery revenue; and could come from institutions other than local government. For community services, staff also scored the degree to which they think each service advances relevant objectives set out in the city’s Strategic Plan. Finally, scores were organized into quartiles, the first representing highest overall strategic alignment, the fourth representing the lowest.

For example, under the General Services department, the Farmer’s Market ranks in the first quartile; animal shelter, adoption and control in the second; fleet maintenance and repair in the third; city staff mail services in the fourth.

The new method lends greater standardization and systemization, but its numerical representations shouldn’t necessarily give the impression of objectivity. The process incorporates subjective staff judgments. Raw scoring components are not included for public review.

The majority — $62 million — would serve as a cushion against such unknowns as rising construction costs. Another $20 million would be available to acquire property, borrowed only once “a clear land acquisition opportunity comes available,” according to the budget document. Another $36 million is reserved for plans to streamline the “Witter/Wheeler Campus,” a cluster of 15 city and school division properties along Duke Street. However, “until a master plan is developed, it would be premature to allocate funding for an individual project.”