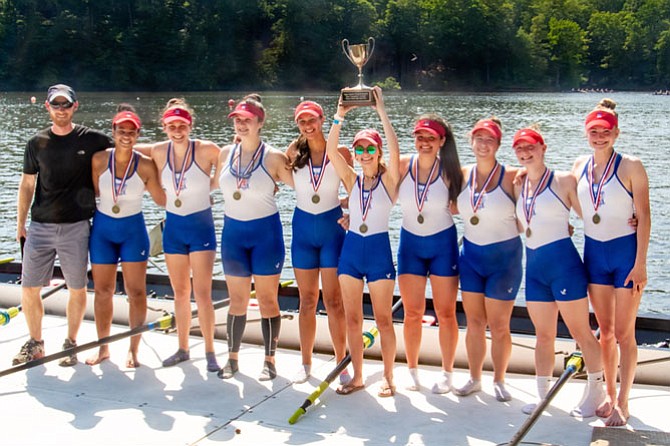 “Our victories at States have all come from individual groups of rowers who found strength in boat unity by keeping a positive focus while dealing with loss and struggling through a rigorous training program.” — Women’s Head Coach Patrick Marquardt 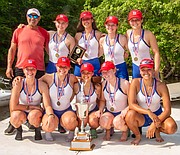 VASRA Day 2 featured 205 boats from 47 schools/clubs. Five of the six TC boats included seniors, including the Men’s Light 4 and the Women’s First 4x (no coxswain), boats that rowed as a team at most a couple times this season. Those experienced rowers brought years of calloused hands, early morning practices, scores of regattas with jubilant wins and “almost” finishes, and sheer will power to Day 2 morning heats to fight their way into afternoon finals in midsummer-like heat and humidity.

In those finals, the Titan seniors on the Men’s First 4, and the Women’s First 8 and Second 8 boats ended their high school rowing careers at the Occoquan Reservoir with a trip to the medals dock to claim Gold.

“Practices during the week before States were challenging,” said TC Men’s First 4 rower Connor McGivern, “but it was gratifying to see our training pay off.” Following their first-place morning heat time of 5:15.0, teammate Ian Willmore noted that the 1-V-4 was “very excited to have earned the spot that we wanted” in the finals, a middle lane next to a tough competitor from Great Bridge, which had won their morning heat and bested the Titans in their only other meeting this season, and a strong Forest Park boat that also won their heat.

The championship race “was nerve-wracking, but definitely exciting,” Willmore said. After a difficult first 100 meters for the Titans that saw Great Bridge jump to a sizable lead, the 5 TC seniors on the 1-V-4 clawed their way back to the front of the pack at the 1000-meter mark, when many boats start to raise their stroke rate for the last third of the contest.

As the crowd in the viewing stands screamed support and Great Bridge made their move for the finish, the race tightened, but the Titans answered with their own sprint to cross the finish line at 5:03.2, only .9 second ahead of Great Bridge. Forest Park finished third at 5:07.2. With their victory, TC has won the Men’s First 4 State title three of the last four years, and four of the last eight.

While McGivern, Willmore, oarsmates Jake Souza and Stefanos Psaltis-Ivanis, and coxswain Michaela Gleeson all had been to the VASRA medals dock to claim Gold before, winning their final State Championship was particularly satisfying. Gleeson, who received the third VASRA Gold Medal of her TC career, said: “I’m proud of all the work we’ve put in over the last four years. It’s great to see the fruit of our labor.”

T.C. Williams Men’s First 4 Coach Pete Hearding agreed: “They rowed well when it mattered most — I’m extremely proud of them. They have had lots of hard-earned success over the past four years. It was a great and fitting way to close out their last race at the Occoquan.”

TC senior and Women’s First 8 rower Rachel Knapp saw the Men’s 1-V-4 race from the water as her boat rowed up to the starting line for their shot at a State Championship. “Seeing our teammates in the Men’s First 4 row to victory was incredibly inspiring for me,” she said. “But once those flags dropped at the start of our race, all I thought about was how much I love those girls in my boat and how proud I would be of them if we got gold. We knew all we had to do was trust each other, trust our training, relax, and swing.”

The Titan Women’s First 8 also claimed their place in the finals following a victory in their morning heat, along with strong boats from Georgetown Visitation and Arlington’s Washington-Lee that also won their respective heats to winnow the state title field to 6. The three boats’ individual heat times spanned only 2.7 seconds, indicating a nail-biting chase for the top prize.

As the race got underway, however, the TC Women gained a solid lead at the halfway point and never let up. They finished their gold-medal sprint in 5:12.8, almost 8 seconds ahead of W-L and over 11 seconds ahead of Visitation, margins that are rare for elite First 8 state championship races. For TC rowers who previously had experienced the heartbreak of missing the top prize at States by fractions of a second, it was a sweet reward for years of hard work.

“Every team has early mornings and seemingly impossible practices, but what really brought our boat together was our bond,” said TC senior Grace Asch. “I’ve never been part of such a tight knit group of girls and I know all of us were racing not only for ourselves but for each other. I will always remember this day and the amazing feeling of finally winning.”

“Our boat feels like a family and our bond as a boat has helped us tremendously throughout this season,” said TC senior Grace Vannatta. “I'm so glad that after four years I was finally able to stand on the States medals dock with some of my best friends.” In addition to Knapp, Asch, and Vannatta, the Titan Women’s First 8 includes seniors Grace Hogan and Charlotte Carey, juniors Grace Fluharty and Blythe Markel, sophomore Madeline Toaso, and junior coxswain Paula Filios.

TC seniors Cleo Lewis and Emma Carroll of the Women’s Second 8 also were seeking one last shot at a state title as their boat stroked to the top 2-V-8 time in morning heat racing. In their midafternoon final, as partial cloud cover gave way to brilliant, hot sunshine, the 2-V-8 field started out relatively evenly in the first 500 meters, but over the middle of the race turned into a two-boat duel between TC and W-L, which also prevailed in their morning heat.

As these two boats lunged towards the finish, the TC 2-V-8s summoned grit, technique, and power to finish in a fast 5:12.3, 1.8 seconds and about a third of a boat length ahead of W-L. Robinson finished third at 5:25.1. Along with Lewis and Carroll, the 2018 State Champion Titan Women’s Second 8 includes Ailysh Motsinger, Madeleine Allen, Elspeth Collard, Charlotte Milone, Julia Clements, Lydia Greenwood, and coxswain Sara Rider.

For the two-day VASRA championship series, TC entered 14 boats, each of which made the finals as one of the six fastest boats in their category in the Commonwealth. Ten of those boats and 86 TC student athletes rowed to the medals dock to claim their hardware.

“Our victories at States have all come from individual groups of rowers who found strength in boat unity by keeping a positive focus while dealing with loss and struggling through a rigorous training program,” said Titan Women’s Head Coach Patrick Marquardt. “The entire coaching staff is really proud of our team and this positive step forward.”

On May 18-19, TC Crew coaches take that team to Philadelphia for the Stotesbury Cup Regatta, the largest high school rowing event in the world.