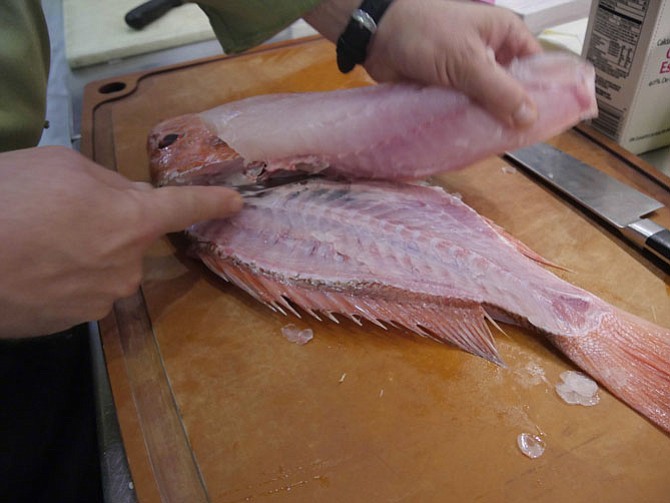 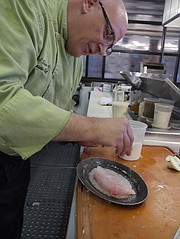 "See the red snapper. It just came off the ice. Look at the gills," Executive Chef James Hudson says, peeling back the flap of skin. "The gills are bright red. And look at the clear eye."

Today Hudson is introducing seared local red snapper with arugula salad to the menu at Jackson 20 on King Street where he has been executive chef for just over a year. "The snapper are migrating northbound right now." Hudson places the 5-1/2 pound snapper on the counter and sharpens his main go-to Japanese Mac knife.

He turns to the ingredients for the fish fumé that will complement the snapper. Hudson grabs three stalks of celery and chops the stalks close to his cupped fingers. He tosses the celery into a small saucepan and adds one finely diced white onion and a little bit of water. Hudson will toss in the fish bones and simmer to get the essence while finishing the rest of the dish. "That's gonna be it. "

Back to the snapper. Hudson makes his first incision just behind the gill plate and works evenly on the first side of the fish. "I flip it over and do the same thing on the other side." He cuts it into 5-ounce pieces and runs the knife blade over the fish, checking for scales and small pin bones. This snapper will serve 4-5 people. Finally he scores the skin "since I will be serving it skin side up. Scoring it keeps the skin from curling." Some of the fish bones are added to the celery and onions. "The fume is getting ready come to a light poach. "I'll let it hang out for 20 minutes."

He sprinkles the fish liberally with kosher salt. "I will leave it for 20 minutes while I'm finishing the rest to help the fish retain moisture and firm up."

Hudson turns to the sauce. He finely minces about a quarter of a large shallot and tosses it in a small pan with 1/2 ounce of unsalted butter. "I will sweat the shallot." Then a pinch of saffron that has been in a little oil to bloom the saffron before adding to the liquid. "The fat will release the crema.” He adds 4 ounces of 40 percent heavy cream, "the good stuff," and will reduce the sauce by half. Then add two spoonfuls of fumé to finish the sauce.

Now for the vinaigrette. "I take about 2 ounces of cider vinegar, a dab of double strength French Dijon mustard and a 1/2 pinch of pepper. The mustard helps with the emulsification. Now the whisk." The whisk is in the other kitchen. "No matter. I have mixed the vinaigrette with chopsticks before." He pours in extra virgin olive oil. “I use a 2.5-1 ratio of oil to vinegar. I like it more on the acidic side." Hudson says he wants the oil to be fully incorporated. He sticks in his finger for a taste. "It's there."

To finish off the vinaigrette he adds a chiffonade of parsley, chives and a bit of French thyme. "Throw that in there." Another test with the finger.

It's time for the snapper. He puts a nice heavy French sauté pan on the burner and adds a healthy amount of butter and a little olive oil and tosses in two sprigs of fresh thyme to flavor the oil. "See the kosher salt has firmed up the flesh real nice." Hudson rinses off the salt and takes the fumé off the heat. He sprinkles a little salt and pepper on both sides of the fish and adds it to the skillet. "It will take 4 minutes on a side, basting it constantly with the butter in the skillet to crisp it up."

He finishes off the salad by tossing a handful of arugula with chunks of red watermelon and toasted almonds. He'll use yellow watermelon later in the season when he can get it. "I use slivered almonds." A final whisk of the vinaigrette and he tosses it with the arugula mixture.

For the final presentation he arranges the salad in a line on the side of the plate with the crispy snapper placed alongside. Hudson drizzles the sauce in swirls on the fish and around the plate. Hudson grates on lemon zest; just a little squeeze of lemon and today's special is ready for its seasonal menu introduction.