Patriots come from behind to beat South Lakes on Saturday. 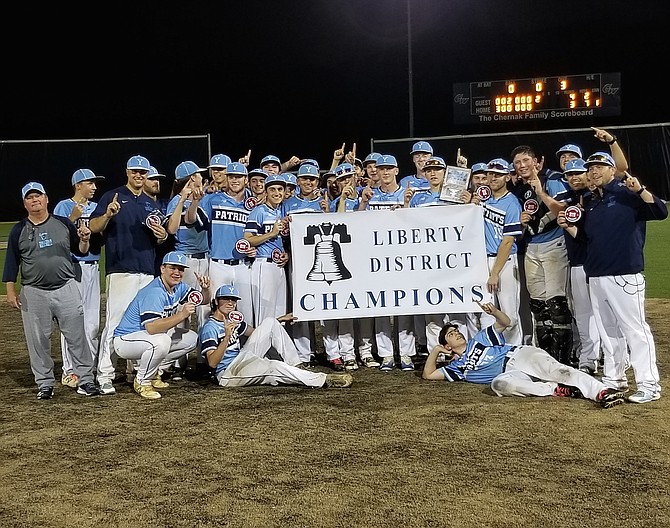 The Yorktown baseball team had managed just one hit when junior catcher Ben Koomey strolled to the plate with one on and one out in the top of the seventh inning during Saturday’s Liberty District championship game.

Koomey blasted a two-run homerun over the right-field wall and the Patriots came from behind to beat South Lakes 4-3 and capture the Liberty District title on May 19 at Barcroft Park.

A Koomey single, two walks, a fielder’s choice and a South Lakes throwing error produced two Yorktown runs in the third inning. Otherwise, Taylor shut down the Patriots lineup for most of the evening, finishing with 12 strikeouts during his complete game two-hitter.

Yorktown, however, managed to come out victorious and earn a No. 1 seed in the Region D tournament.

Did Koomey know his seventh-inning fly ball to right would sail out of the park?

South Lakes jumped out to an early lead with three runs in the bottom of the first inning. Yorktown starting pitcher Michael Lowen struggled with his control, allowing three hits, two walks and hitting a batter in the opening frame. If Lowen hadn’t struck out Seahawks left fielder Jack Howard with the bases loaded and two outs, the damage could have been worse.

Luckily for the Patriots, they were able to draw from recent experience to remain confident. Yorktown overcame an early deficit to beat South Lakes 6-5 during a regular season meeting less than two weeks prior.

“That’s what we said after they got those three runs,” Yorktown head coach John Skaggs said. “‘Guys, we’ve been here before against the same team at their home field. This is their home field tonight, so let’s do it. We’re not done,’ and it worked out.”

Lowen settled down after the opening frame, allowing just three hits over the next 3 2/3 innings.

“He came back and showed the Michael Lowen that we know,” Skaggs said. “He got mad, he got angry and he attacked the zone and then he started getting three-, four-pitch at-bats against guys.”

Lowen allowed three runs on six hits over 4 2/3 innings. He walked two, struck out five and hit a batter. The senior said he started to work at a quicker pace and changed his release point after struggling in the first.

“I was talking to my pitching coach and Koomey,” Lowen said, “and we worked on going through a faster pace, playing more of a mind game just to get them not feeling comfortable so that way I could do what I’ve got to do.”

Junior left-hander Aidan Henning earned the win in relief for Yorktown, pitching 2 1/3 scoreless innings. He allowed just one hit and struck out two.

With Yorktown trailing 3-2 in the bottom of the fifth, the Patriots made a key defensive play to keep the deficit at one run.

With two outs and a runner on, South Lakes pitcher Taylor drove a base hit into right field off Henning. Yorktown right fielder Brendan Matarese tracked the ball down and threw to the cutoff man, second baseman Will Porter, who threw home in time to tag out a South Lakes baserunner at the plate.

Next up for Yorktown is the Region D tournament.

“It’s insane,” Lowen said about winning the district title. “I’ve been on this team since I was a freshman. It’s pretty wild that we finally made it.”