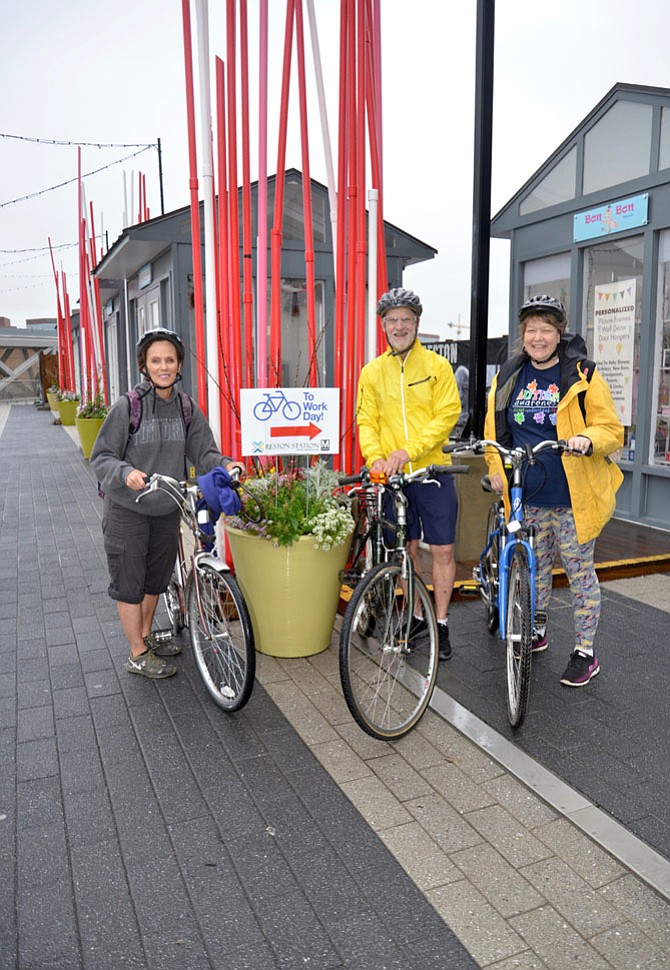 From left: Terri Haskell from Herndon, and Tom Crotty and Kim Sigle from Reston, joined up at the Reston-Wiehle Bike to Work pit stop to check out the action, before pedalling off to Lake Anne Elementary in Reston, where all three work. Photo by Andrea Worker. 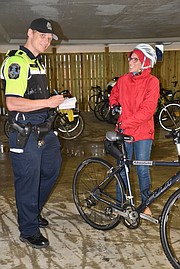 No, she’s not getting a ticket at the Reston-Wiehle Bike to Work Day pit stop. Officer J. Lilly of the Metro Police is registering Brenda Huber’s bicycle. It’s just one piece in the loss prevention plan employed by Metro for cyclists’ safety. 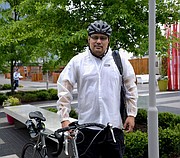 James Gustilo wasn’t actually biking to work on Bike to Work Day. Riding in from Sterling, he stopped on his way to Falls Church and then to Tysons for a doctor’s appointment, then home again. “Biking can be for any reason.”

Rain? What rain? The cyclists were all high and dry – at least as long as they enjoyed the Reston-Wiehle Station pit stop for the local edition of Bike to Work Day (BTWD) before pedalling off to their final destination.

May is National Bike Month and Friday was Bike to Work Day. Seventeen pit stops for participants were set up around Fairfax County. The five new ones added in 2018 are a testament to the growing popularity of cycling for transportation and not just for recreation.

The Reston-Wiehle group got creative, and established their rest and fun zone underground. With a nod to nearby Reston Town Center, the area resembled a typical Reston Festival event, with vendor and volunteer booths filling the space.

There were plenty of freebies, including food and drink to fortify the hardy riders who were braving some often-serious downpours, as well as cycling and fitness related products for sale.

There was even a massage therapist with portable massage table ready to work those riding kinks out. A DJ was keeping things lively with up-beat tunes guaranteed to crank up the pedalling tempo – if the cyclists could tear themselves away from the action and actually get back on those bikes.

BIKE SAFETY – for both rider and machine – were also addressed at the Reston-Wiehle pit stop. A contingent of Reston Bike Patrol police officers was on hand, and when not contributing a bit of humor to the proceedings – and keeping up the spirits of those manning outdoor spots - they were more than happy to dispense safety information.

Officer J. Lilly of the Metropolitan Transit Police fortunately was stationed inside in the dry where he also spoke about cyclist and cycle safety on the Metrorail System, and was available to register bikes “for easier tracking, just in case.”

Cyclists could be seen zooming in and out of the Station Plaza from all directions.

Some of those riders included:

Brenda Huber of Alexandria. Yes, it’s a long way from there to Reston, but Huber mixes things up on her commute. Some days she takes the train to the Vienna Metro station, then hops on her bike for the remaining segment of her trip to work in Reston.

James Gustilo from Sterling was actually off work on Bike to Work Day. Instead, he was biking to Falls Church and then to a doctor’s appointment. With all that cycling, he probably doesn’t spend too much time in the doctor’s office. He mostly rides on the weekends, but likes to get in a Bike To Work run at least once or twice a month.

Terri Haskell of Herndon, Tom Crotty from Reston, and Kim Sigle from South Reston were riding together. “Not too far to go,” said Crotty. The three all work at Lake Anne Elementary School in Reston and pedal power is their preferred method of transportation. Even with the rain, Haskell was pretty sure that most days, cycling was faster than driving, as area traffic continues to increase.

THESE FIVE RIDERS joined an estimated 17,000-plus Metropolitan Washington area residents expected to leave their cars at home and use old-fashioned people power to get where they were going. The annual event is co-sponsored by Commuter Connections, a program of the National Capital Region Transportation Planning Board at the Metropolitan Washington Council of Governments (MWCOG), the Washington Area Bicyclists Association and local governments like Fairfax County.

In a statement released during the event, MWCOG cited encouraging statistics from the 2016 Bike to Work Day survey, which found that 14 percent of the participants that year were first-time cyclists, while 2 percent of the veteran cyclists reported increasing the number of times they road per week after joining in the BTWD fun.

The festivities of Bike to Work Day may only roll around once a year, but there are plenty of resources available to encourage new riders and offer advice and information to the most experienced. Visit www.commuterconnections.org/bicycling/ for more information, and stop by your local bike shop for personal assistance and to experience the friendly, and growing, area cycling community.