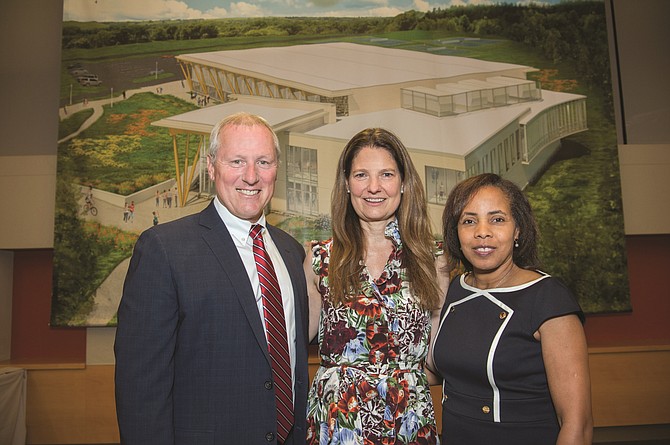 Construction of a new Center for Athletics and Community is underway at The Potomac School. Work on the facility began in July, and it is slated to open in late fall 2019.

The project has garnered one of the largest gifts in the school’s history: $12 million from the Spangler family. Dr. Abigail Spangler, a member of Potomac’s Board of Trustees, represented her family at a recent dinner honoring the individuals whose leadership has made the new center possible. Dr. Spangler’s father, C.D. Spangler Jr., a widely respected business leader and former president of the University of North Carolina system, passed away this July. With his daughter, Mr. Spangler was instrumental in the decision to support Potomac’s new center.

Head of School John Kowalik says, “The Spangler family’s gift has given us tremendous momentum, inspiring others to join in supporting this project, which will benefit Potomac students for years to come. I will also note that Abby Spangler’s leadership extends far beyond financial generosity. She has been actively involved with our school for many years, and she is always the first to step up when something needs to be done. We are deeply grateful for her unwavering commitment to Potomac.”

He continued, “I was excited when Abby mentioned having her father join our conversation about the planned building. While I did not know Mr. Spangler personally, I certainly knew him by reputation. I quickly saw that he understood the challenges involved in turning a vision into reality. He had led the entire University of North Carolina system. He had served as president of Harvard’s Board of Overseers and chaired a major campaign for Harvard Business School. And he was the patriarch of a family devoted to helping others. All of this put Mr. Spangler in a unique position to assess our plans, offer insightful observations, and ultimately make an informed decision about investing in Potomac’s future. It was a privilege to get to know Mr. Spangler, and he will be remembered with deep respect and gratitude at The Potomac School.”

In all, the school recognized 78 leadership donors at the dinner; their collective support for the new center totals more than $31 million. Fundraising will continue, as Potomac aims to cover the project’s entire cost of $37 million through philanthropic support.

The 76,500-square-foot Center for Athletics and Community will include a gymnasium with a competition basketball court and three practice courts; an indoor jogging track; seven squash courts; a weight room, cardio room, and multipurpose activity room; and flexible gathering spaces that can be configured for a variety of events. In combination with the school’s existing facilities, the center will support a robust athletics program that fields teams in 26 interscholastic sports. It will also meet the school’s longtime need for an indoor gathering space large enough to accommodate the entire Potomac community.