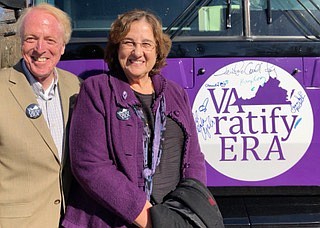 Virginia supporters of the Equal Rights Amendment (ERA) launched the campaign for recognition of gender equality in the United States Constitution. The campaign seeks to press Virginia lawmakers to approve the 22nd amendment, and make history providing the 38th state vote needed for national ERA adoption. The campaign, “VAratifyERA” (www.VAratifyERA.org) includes a ten-day bus tour mirroring the suffragists 1916 special train tour. A listing of the bus tour scheduling and stops is available at: https://varatifyera.org/tour-schedule.

The ERA bus stopped in Clifton recently with supporters State Sen. George Barker (D-39), and Delegates Jennifer Carroll Foy (District 2), Hala Ayala (District 51) and Kaye Kory (District 38) on-board. They were joined on the bus by Jane Barker, Co-Chair of the Democratic Women of Clifton and Northern Virginia and wife of Sen. Barker. Jane Barker is a principal force behind the bipartisan effort to build a suffragist memorial, near the Lorton location where many suffragists were imprisoned during their struggle to obtain voting rights for women. The suffragists memorial is planned for unveiling in August 2020; the 100th anniversary of the 19th Amendment passage. Mrs. Barker lauds the memorial “as a means of educating boys and girls about this part of women’s voting history.” Fundraising for the memorial is ongoing. suffragistmemorial.org