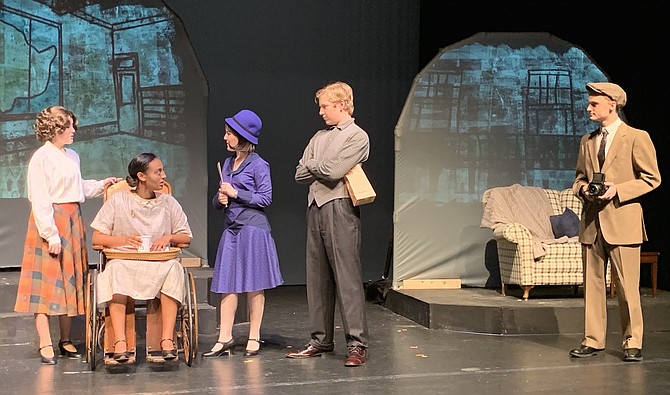 "Lip, dip, and paint" away ladies! As the first World War raged across the Atlantic, luminous watches were all the rage back home. Assured that the luminous paint was harmless, the watch painting job seemed like a dream come true for these young ladies. Follow Bishop Ireton High School as they reenact the tragic true story of the Radium Girls. This chilling play recounts the story of young ladies that painted watch dials with luminous radium paint. Instructed to lick the brushes to achieve a fine point, the girls soon became ill with mysterious jaw ailments and back aches. The play was originally produced by Playwrights Theater of New Jersey, penned by D.W Gregory.

The story is told primarily through the eyes of young watch painter Grace Fryer (Lyndsey Lawrence). Her powerful performance transported the audience into a world of desperation and despair. Opposite of Grace was the conflicted company boss Arthur Roeder (Andrew Holland), who knew something was wrong, but was torn between his company's profits and the safety of his workers. His booming voice and looks of anguish made the audience ask, "What would I do in this situation?"

Doomed from the beginning, Irene Rudolph (Samantha Fisher) and Kathryn Shaub (Abigail Abraham) blissfully trusted the miracle paint. "Time is on your side!" they would say. As the audience watched in horror, the girls laughed as they painted each other's faces and teeth. Abraham impressively delivered every last bit of energy she had into her character with both looks of delight and horror. Irene's death was the first indication that something was terribly wrong with the paint.

Other notable performances included characters such as Mrs. Diane Roeder (Olivia Hays), Sob Sister (Sophie de Waal), and Tom Kreider (Kip Sisel). With her clicking heels and annoyed-wife facial expressions, Hays exposed a softer caring side of Arthur Roeder. Waal's performance as an energetic reporter was like that of a bumble bee, always buzzing around the characters, attempting to snatch up any valuable information for her newspaper. Her wide smile and energetic delivery dazzled the crowd with her every appearance. Sisel's depiction of Grace's distressed love grew more powerful as the story progressed, pulling on the heartstrings of the viewers as they watched him grow more and more hopeless.

The setting of Orange, N.J. was brought to life with the effort and expertise of the talented production crew. Costume team leader (Celia Curry), and her sensational costume team accurately portrayed the 1920s, and did an outstanding job progressing the outfits as the characters aged during the story. Lighting was a key element due to the gloominess of the play, and the lighting crew (Thomas Monaghan and Hailey Crow) was up to the task. The lights slowly begin to dim near the end of Act 2, giving the sense that the characters were running out of time.

The Radium Girls' lives and deaths exposed the ghastly truth of the "miracle" radium paint. The performance of Bishop Ireton High School left the tragic memories of these young ladies glowing in the hearts of the audience, just as the radium left these poor ladies glowing in their graves for years to come.