Nickels and Dimes in Alexandria
Votes

Nickels and Dimes in Alexandria 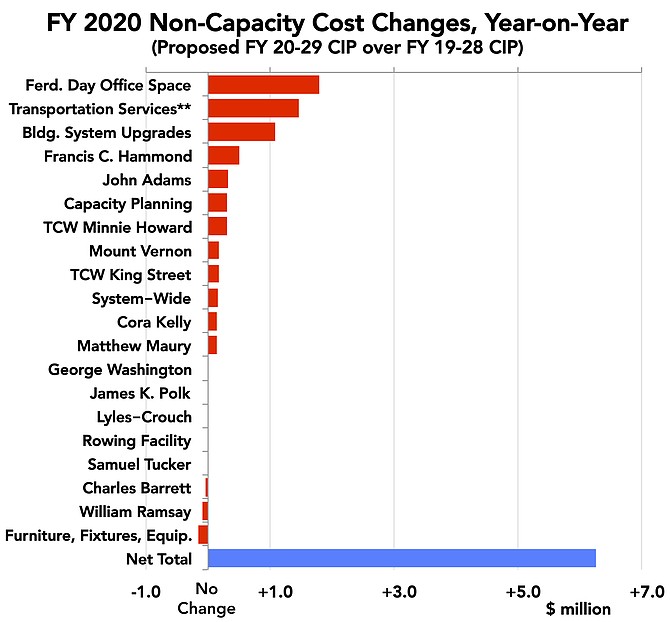 In its budget last year, the city government committed fully to the School Board’s 10-year capital request of $475 million through FY 2028. That represented about a fifth of the city’s total $2.2 billion capital outlook — the second largest expenditure category behind sewers. It also represented a 27 percent increase over the city’s funding commitment the year before, and a 73 percent increase over its commitment the year before that. However, the School Board repeatedly cautioned that last year’s amount, despite the big bump, wouldn’t cover the full price tag of deferred maintenance and enrollment-driven need to build new schools. Plenty more work waited beyond the 10-year horizon, they said.

So it came as little surprise that Superintendent Dr. Gregory Hutchings, Jr. proposed to the School Board on Thursday, Nov. 8 a $476 million capital improvement budget through FY 2029. The School Board will debate the proposal, tweaking it however they deem necessary, before adopting a final, official request on Thursday, Dec. 20 to send to the city manager.

The current proposal also “does not fully satisfy all of our projected capacity needs. … We need to make sure that the public and everyone knows that,” said School Board member Bill Campbell.

Unabated enrollment growth continues to drive the bulk of Hutching’s proposal. The division forecasts enrollment to grow by about 2,500 students (16 percent) over the next 10 years. The biggest capital line items for the schools in FY 2019 included $30 million for potential but as-of-yet unspecified land acquisition and $12 million for re-locatable classrooms, an interim Band-Aid. But even with those dominoes knocked down, this year another new school entered the horizon, adding $45 million for construction in FY 2029.

All in all, the next 10 years will include high school capacity expansion; renovations or replacements of three elementary schools; and two new schools, one of which will serve as temporary “swing space” to house students while other projects are underway, before converting to its permanent new use.

But some of this year’s big budget request also results from numerous year-on-year non-capacity cost increases, and some new additions, for FY 2020.

For example, this year includes a new line item for $1.8 million to refurbish an unused floor above Ferdinand T. Day Elementary School for an office use. This year also includes $1.5 million in additional transportation dollars, in part to upgrade the school bus fleet, only a quarter of which is equipped with air conditioning. All together, the changes add up to $6 million in additional single-year costs, up 50 percent increase from estimates only a year ago.

Miscommunication and contention between the City Council and School Board have simmered for several years. It came to a head during the FY 2018 process, when the School Board requested $611 million in 10-year capital funding, more than double its request one year earlier. So last year’s budget agreement represented something of a détente, hailed as the beginning of a new era of collaboration.

Part of the mutual understanding “was to have some certainty in terms of how much money per year we were looking at, so that people could plan,” said School Board member Hal Cardwell. But “if we’re trying to get to consistency year to year, but here the school system proposes a [50] percent jump from one year to the next …, that’s not giving it.” The schools need “a rationale for why, all of a sudden, things got moved up [on the timeline], why things weren’t in there, 12 months ago.”

“We are being a little more aggressive in this area because we do not want to be in the situation [of deferred maintenance] we’re in currently,” said Hutchings. But “this is still not doing everything. … This is being extremely conservative to still try to keep the buildings warm, safe and dry. We may see even more once [the division’s forthcoming facilities assessment update] is done. … I don’t know what those results are going to bring.”

School Board member Margaret Lorber thinks a facilities audit, prepared in October last year, immediately prior to the then-superintendent’s FY 2019-28 proposal, gives a necessary justification. Virginia schools should “plan to spend an amount equal to at least 4 percent of its facilities’ current replacement value annually” for capital needs, according to the audit. But it found that Alexandria’s school system spent only a bit over one percent in 2017.

The audit “told us we were under-spending on maintenance. … Now we’re sort of realizing where we needed to be, not that we’re being spendthrift and foolhardy,” said Lorber.