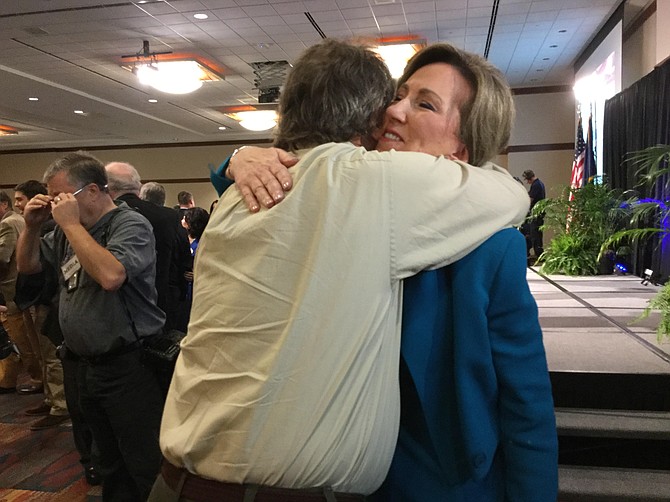 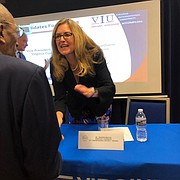 VA 10th District – By the Numbers

“I believe Dr. Christine Blasey Ford,” Wexton said, adding that she was impressed with Ford’s “courage and grace” as Ford quietly detailed her allegations against Kavanaugh.

On Friday, Wexton declared it was “time for people of good conscience to take a stand,” praising Ford for her historic testimony.

“Her courage in a situation designed to put her at a disadvantage, and her grace in the face of powerful men who refused to investigate her claims, allow interviews of key witnesses, or even speak to her were extraordinary,” Wexton said.

U.S. Rep. Barbara Comstock (R-10), who is friends with Kavanaugh and said he was “an excellent choice” when he was nominated for the high court in July, did not walk back that endorsement when she issued a statement a few hours after Wexton’s statement on Friday.

“Both Judge Kavanaugh and Dr. Ford have been ill served by this process,” Comstock said.

"Both Judge Kavanaugh and Dr. Ford have been ill served by this process in which Senate Democrats first withheld the information regarding Dr. Ford from both the Republican committee members as well as the FBI, and then secondly when Democrats – against the explicit request of Dr. Ford – leaked the information to the press rather than allow for a confidential review. This partisan abuse of the process has been a travesty for all involved, and has led to death threats against Dr. Ford and Judge Kavanaugh and their families and an overall toxic partisan environment.

"When the allegations about Judge Kavanaugh were first leaked to the press by Democrats for partisan purposes, I said that both Dr. Ford and Judge Kavanaugh should be heard and testify under oath. They have now done so and the Senate Judiciary Committee is completing the process with the additional FBI investigation.

"I have worked closely with my colleagues leading the fight against sexual harassment and abuse on a bipartisan basis, already passing landmark reforms and legislation. We have been painstakingly non-partisan in bringing together our colleagues on comprehensive reform legislation that provides victims with strong protections and procedures to address wrongdoing, accountability and zero tolerance. Our bipartisan coalition that passed these reforms understand that offenders come in all political stripes, races, genders and creeds.

"I have called out Democrats and Republicans alike as sexual harassment charges have come forward. For example, I was one of the first members to call on Democrat Rep. John Conyers to resign as well as Republican Rep. Blake Farenthold. However, each case is unique. When Virginia Democrat Rep. Bobby Scott was accused of sexual harassment by a former staff member, I did not call for his resignation, but I support any alleged victim having a fair process to be heard. The days of the likes of James Carville and Paul Begala calling alleged victims ‘trailer trash’ or ‘bimbos’ are and should be over.

"I have talked with many victims and know the difficulty in bringing forward claims which is why I fought to reform sexual harassment laws and policies. These reforms always retain due process.

"In contrast, Jennifer Wexton has been blatantly partisan on sexual harassment and abuse issues where she has failed time and again to pass any legislation. Instead Wexton has voted against victims including her vote in 2016 against a bill that would require convicted pedophiles to disclose where they work and attend school as well as their home address and this year she voted against a bill that most Democrats supported that provides restitution to victims including victims of domestic or sexual abuse.

"Furthermore, Wexton has been hypocritically silent as to the many Democrats who have a history of predatory or abusive behavior such as Bill Clinton, John Conyers, Al Franken, Democrat Party Chair Keith Ellison, or former Rep. Jim Moran, with whom Wexton campaigned recently. Jennifer Wexton has been hyper-partisan when it comes to the Supreme Court and even went so far as to join a few partisan legislators to oppose the naming of the Scalia Law School at George Mason in Virginia. While Justice Elena Kagan and Justice Ruth Bader Ginsburg celebrated this honor to the late Justice Scalia, a treasured colleague, Wexton chose to stand with the small-minded protestor crowd denigrating Justice Scalia."

“I believe Dr. Christine Blasey Ford. Her courage in a situation designed to put her at a disadvantage, and her grace in the face of powerful men who refused to investigate her claims, allow interviews of key witnesses, or even speak to her were extraordinary.

As a former prosecutor, I am dumbfounded by how poorly this process was handled. There were so many basic steps that could have been taken to establish the facts. Even now it is not too late to slow this confirmation down, do the right thing, and conduct an impartial investigation. Anything less will make it clear that partisan interests were always a higher priority than the truth.

No one who claims to support women or survivors of sexual violence should approve of what has happened here. Rushing to give a lifetime Supreme Court appointment to Brett Kavanaugh without hearing from other accusers or additional witnesses sends the worst possible message to our daughters and sons. It is time for people of good conscience to take a stand.”

Comstock blasted Senate Democrats, accusing them of abusing the confirmation process and creating an “overall toxic partisan environment” by withholding Ford’s sexual assault allegations “from both Republican committee members as well as the FBI,” and then leaking the information to the press “against the explicit request of Dr. Ford…rather than allow for a confidential review.

"This partisan abuse of the process has been a travesty for all involved," Comstock said.

On Sunday night, Wexton responded to The Connection’s request for a comment on Comstock’s statement.

"Barbara Comstock purports to be a champion of the ‘Me Too’ movement and would have a real opportunity here to stand up for the victim and to stand up to members of her party and take a leadership role, but she’s not doing that,” Wexton said.

“Instead, she is holding her old friend, Judge Brett Kavanaugh, to a much lower standard than the one she set for members of the opposing party. Women who are the victims of alleged sexual violence, like Dr. Blasey Ford, deserve our support."

Political experts said the Ford-Kavanaugh hearings could have a profound effect on the Nov. 6 midterm elections, in which a record number of women – more than 200 – are running for house seats.

Virginia’s 10th Congressional District has been held by a Republican for 38 years, but Democrats believe demographic shifts in the sprawling district - which include sections of Fairfax and Prince William counties and all of Loudoun County – and growing opposition to President Trump’s politics, will lead to a Democratic victory on Nov. 6.