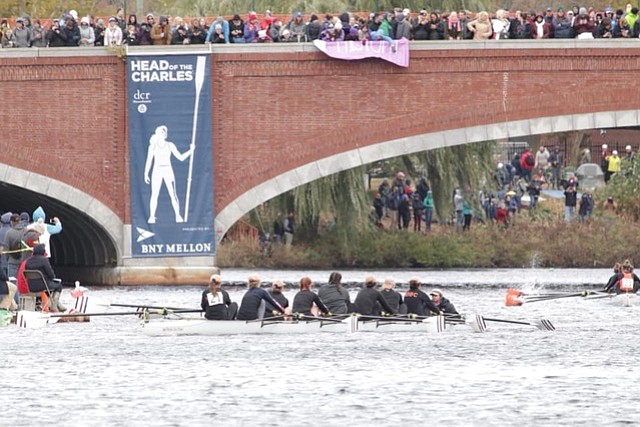 The Old Dominion Boat Club competed last weekend in the 54th annual Head of the Charles.

The women of Old Dominion Boat Club competed last weekend in one of the world’s largest regattas, placing 27th in a field of 85 boats at the 54th annual Head of the Charles.

More than 11,000 athletes from 23 countries converged on Boston for the regatta on the weekend of Oct. 20-21. The two-day event is held on a three-mile long course, with seven bridges lined with crowds of cheering spectators.

The ODBC women’s first eight had a time of 19.21.922. Saugatuck won with a time of 17:34.69. ODBC’s high school women were competing against college teams and other elite athletes from around the country. “The sheer number of boats that come to the Charles, and seeing them all along the shore and out on the river is kind of mind-blowing,” said rower Grace Fluharty.

The women’s performance assured them an automatic spot in next year’s Head of the Charles. The regatta, which draws top rowers from around the world, typically turns away boats.

“We were fortunate enough to be starting high enough in the procession, 21/85, that we could avoid the chaos of the significantly slower crews. Once the race got started the stress almost melted away,” said coxswain Paula Filios.

The men’s first eight from ODBC also competed, placing 77th after a crash that slowed them down and cost them a second’s deduction.

Head of the Charles followed last week’s Occoquan Chase, when ODBC fielded more than a dozen boats, many of them competing against adult teams.

The fall rowing season is in full swing, as ODBC travels next to Philadelphia for Head of the Schuylkill on Oct. 28.