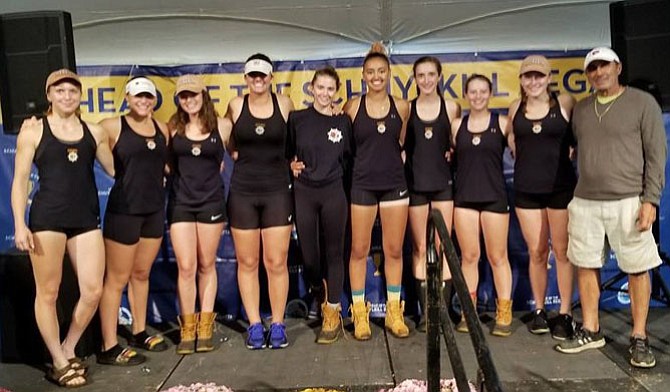 On Oct. 22, the ODBC Womens First 8 competed in the invitation-only Head of the Charles Regatta in Boston, the premier fall U.S. regatta that draws entries from around the U.S. and overseas. On a day with almost ideal weather and river conditions that produced over a dozen new event records, shattering times that had stood for 20 years or more, the ODBC elite Womens 8 placed 23rd out of 85 boats in their event with a time of 17:20.58, a minute and a half better than their time from the wind-whipped, whitecapped HOCR race in 2016. Their finish ensures an invitation back to Boston for the ODBC Women’s First 8 in the fall of 2018.

On Oct. 29, the ODBC squad travelled to Philadelphia for the rain-soaked Head of the Schuylkill Regatta, another major fall East Coast event that draws a wide field of first tier boats. Once again, the ODBC Womens First 8 rose to the challenge, notching a third-place finish in a 43-boat field with a time of 14:37.13.

Stroking to the finish in a downpour and their best race of the season, the surging ODBC Mens Frosh 8 also captured third place in their HOSR event with a time of 15:02.06 in a 49-boat field. The ODBC Frosh 8, many of whom will be competing for a seat on the always competitive TC Williams Spring Frosh 8 boat, include coxswain Jacob Solomon and rowers Clifton Longobardi, Noah Schuerhoff, Luke Depeyrot, Barry Najarro-Blancas, Richard Bavin, Tim Chen, Matthew Posson, and Patrick Kenny.

In a season in which they raced against the “heavy” 8 boats in most regattas, the ODBC Mens Light 8 boat began an end-of-season rally at the HOSR with a 4th place finish among the 65 boats in their event with a time of 14:07.47. The following weekend, on Nov. 5 at the Head of the Hooch in Chattanooga, the Light 8s competed for the first time this fall against only other light mens boats in their event and scored a 4th place finish among 22 boats with a time of 16:26.05.

Finally, in one of the last races of the ODBC fall season closer to home at the Head of the Occoquan on Nov. 5, sophomores Maddie Toaso and Maddie Allen captured a 3rd place finish in the 13-boat Womens Doubles event with a time of 22:33.88.