‘All That Jazz’ at Lake Anne
Votes

‘All That Jazz’ at Lake Anne 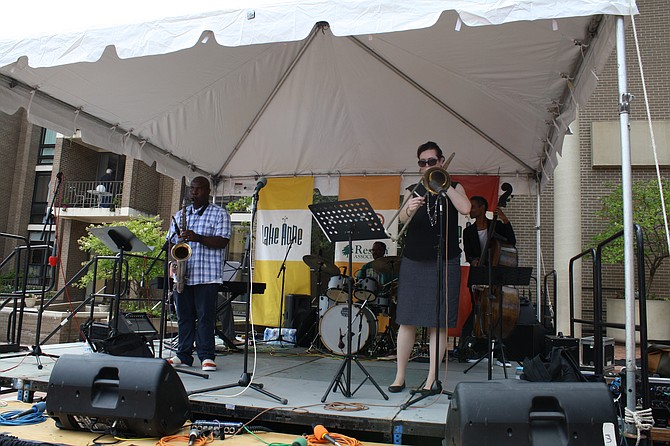 The Shannon Gunn Quintet features Shannon on the trombone. Photo by Mike Salmon.

With her 2016 “Taste of Reston” award in hand, Flor Denegri gets ready to cook Peruvian empanadas for festival fans. 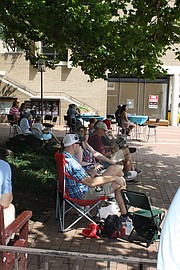 The shade on the side of the plaza attracted many from the afternoon sun.

When the Shannon Gunn Quintet went on stage to kick off the Reston Jazz Festival over Labor Day weekend, Gunn the vocalist and songwriter had a song called “Orange Noise,” that takes a jab at politics in Washington, D.C. this year. “Lots of lies,” she said.

The loose definition of orange noise is "a quasi-stationary noise with a finite power spectrum with a finite number of small bands of zero energy dispersed throughout a continuous spectrum," according to MediaCollege.com, but Gunn noted her intent when writing the song. “Might get a little political,” she said, before going on stage to kick off the festival at the Lake Anne Plaza in Reston. She described their sound as “straight ahead jazz, funk, groove.”

At the lakeside plaza, other jazz and blues bands that were part of the festival included Revelator Hill, Shachar Rogers, the Vaughn Ambrose Quintet, GiGi McLaughlin, and the Adrian Duke Project.

Eve Thompson, owner of the Lake Anne Coffee Shop and Wine Bar, and festival organizer, oversaw the set-up. “The line-up was evenly split between blues and jazz,” said Thompson. This was her 12th festival she was involved with.

Paddleboards and kayaks headed out on the lake while the music played, creating a musical background for the boaters.

Many musical groups have played there. “It’s a great place to listen to music,” Thompson said. She lives in one of the condos on the lake, and the festival was put on by the Reston Community Center and the Lake Anne Merchants.

Gunn writes all her own songs and one they played was a tribute to President Barack Obama and another about a friend’s bout with cancer called “Cancer Free.” People are the topic usually, and “sometimes they inspire me and sometimes they make me angry,” she said.

The afternoon heat chased a lot of the crowd into the shade near the coffee house, and several tents were erected on the plaza for food and drink. Mustang Sally Brewing was in from their base in Chantilly to serve their recently-release IPA beer called “Better Angels IPA,” and at the tent next door, Flor Denegri was serving homemade Peruvian empanadas that won a 2016 “Taste of Reston” award.