In the Kitchen: Meet Vaso Volioti: Chef and Owner of Vaso’s Kitchen of Alexandria
Votes

In the Kitchen: Meet Vaso Volioti: Chef and Owner of Vaso’s Kitchen of Alexandria 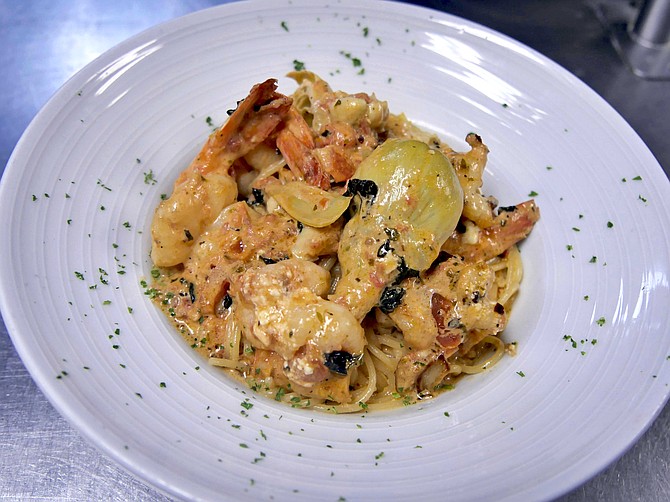 Veal is layered with picnic ham, asparagus and provolone.

Vaso Volioti pours a scoop of liquid margarine into a sizzling hot skillet. "It has to be on high." While Volioti waits for the oil to heat to the proper temperature, she shakes two thin veal scallops into a container of unseasoned flour and then immerses each in a container of beaten eggs.

"Hear the oil crackle?" Volioti places each piece of veal into the skillet side by side. "We don't leave it long, about three minutes total. It's veal." She turns each piece over in the skillet. "See, we wait for it to look like this. OK, I'm going to dump the oil out."

She places the skillet on the counter and takes the next step. "I place a thin slice of picnic ham on top of each piece of veal." Then she places four pieces of asparagus parallel on top of the ham and tops it with a round slice of provolone folded in half "so it doesn't melt and fall out in the pan." Finally she tops off the layers with a whole slice of provolone.

After a sprinkle of salt and pepper she adds two 2-ounce plastic cups of Fairbanks California sherry, 1/2 cup of heavy cream and two one-inch cubes of butter. Back on the heat while the sauce cooks down. "What I will do now is put the skillet in a 550 degree oven for about 3 minutes while I turn to Vaso's Shrimp, my original recipe." When ready to serve, she plates the veal on a large oblong white dish with a puddle of sauce dripping over the edge.

Volioti again waits for the oil to heat up, this time Greek olive oil, "so that it cooks the shrimp right." She has cleaned (deveined) and cut five large shrimp. "I put in two handfuls of chopped garlic and wait for it to get full color." In a couple of minutes Volioti adds the shrimp and swirls them around in the olive oil before adding diced tomatoes and a large mixing spoon size of whole artichoke hearts.

While the mixture is cooking, she adds a large accent of oregano and a sprinkle of mixed salt and pepper. "Now I'm using a pinch of red chili peppers. And now I'm going to use brandy for the flavor is really good." She inches back as flames skyrocket from the stove while she tosses the shrimp. Volioti finishes the dish off with 1/4-cup heavy cream and a ladle of her homemade tomato sauce. "Now see. I'm sprinkling on finely crumbled feta. Let's cook it a little bit, still on high."

Volioti has started a large pot of boiling water for the pasta. She puts in two full handfuls of salt. "We'll cook the spaghetti three minutes until it's al denté. It depends on what kind of pasta you are making." Volioti drains the spaghetti. "We don't want any water," and tosses it with the shrimp and sauce in the skillet, then carefully places the pasta in a large white bowl and arranges each shrimp and artichoke on top.

Volioti says the favorite customer dish at her restaurant, Vaso's Kitchen, on Powhatan Street is the seafood marinara with shrimps, scallops, clams, calamari, mussels, herbs and white wine. Also the fresh branzino. Her daughter Lia Volioti, who has worked in the restaurant with Vaso for 13 years this Saturday, says that customers these days try to eat healthy and some will order the fish and substitute rice or the vegetable of the day for the pasta. Vaso says, "Me it's hard to decide. I love everything I cook. Really. Or I wouldn't cook it."

Vaso said she worked for 35 years as a waitress at an Italian restaurant on Richmond Highway, but when her son wanted to go to New York to become ... "an actor," her daughter supplied the word, Vaso decided to quit and start her own restaurant. Lia, who had worked at Delta, came to help because "a restaurant is very busy." Vaso came to America from Cyprus when she was 10 years old, and the whole family in America was in the restaurant business.

Vaso has just returned from a trip to Australia, where she went to meet the family of a man who had rediscovered her on Facebook from their childhood. "And look what I came back with," she said, sporting a heavy left hand with a large sparkling diamond.