One Great Woman Behind a Great Fire Department
Votes

One Great Woman Behind a Great Fire Department 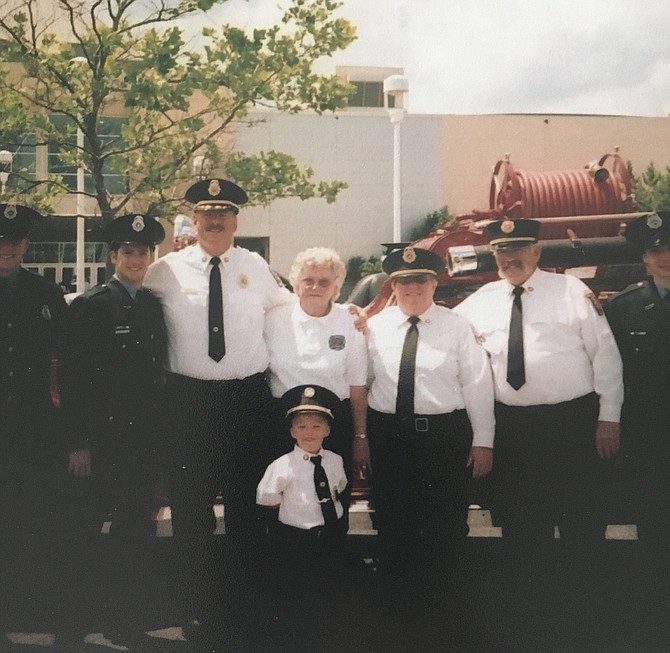 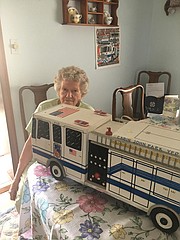 Mary Morgal, long-time president of the Cabin John Park Volunteer Fire Department Auxiliary, shows off a mailbox made specially for her. 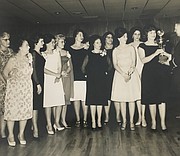 Mary Morgal, far right, accepts a trophy on behalf of the women of the Cabin John Park Volunteer Fire Department Ladies Auxiliary from the Chief Charlie Lawrence. Photo is from the 1970s, Morgal said.

Mary Morgal has been part of the Cabin John Park Volunteer Fire Department since she was a young teenager.

Now 90 years old, she never dreamed she would still be involved with the volunteer fire service that serves her native Cabin John along with Potomac and parts of Bethesda.

It all started when Morgal worked as a bookkeeper at the Tuohey’s Restaurant and Bar on the corner of MacArthur Boulevard and 79th Street in Cabin John. It was owned by Dave Tuohey, then fire chief of CJPVFD.

“Once he asked me to answer the fire phone,” she said. “I couldn’t go behind the bar — I was too young — but I could reach the phone from the kitchen. I answered the phone, found out where the fire was, ran upstairs and threw the switch to blow the siren [alerting the volunteers that there was a fire] and ran over to the firehouse to tell the volunteers who were arriving where the fire was.”

The firehouse, Number 10, was located on MacArthur Boulevard, just down from the restaurant, Morgal said. It is still there but not as a fire house; it is Firehouse Custom Cleaners. Station 10 is now on River Road just west of the Beltway.

She has been active ever since. She joined the department’s auxiliary in 1953 and became president in 1960. She still holds that post. That is almost 60 years.

The Cabin John Park VFD Auxiliary, formerly the Ladies Auxiliary, but now men can join too, Morgal said, has been part of the Department since it was founded. Morgal’s mother was a member of the Auxiliary.

“We do whatever we are asked to do,” she said. And apparently very well.

Mary Morgal shared one of her own personal goals for the Auxiliary.

“My dream was to bring in a million dollars to buy apparatus,” she said. “We did it! It took 26 years.”

Patti Troxel, also a long-time member of the Auxiliary, enumerated some of Mary’s many contributions to the fire department.

“Mary is always there for Open-House which remains a major part of public outreach during Fire prevention week every October,” Troxell wrote in an email. “Years ago, she cooked dinners at the Carnival which supported CJPVFD in fundraising and supports current fundraising activities to this day.Mary's goals are to support CJPVFD's commitment to the community it serves. This is best done by numerous fundraising and community projects. Mary has always been a good leader as she sets a great example for the next generation coming into the fire service and is a pleasure to be around.”

The Auxiliary also helps purchase Christmas gifts for children at the National Home for Children and Families in Bethesda and helps decorate the fire truck Santa rides around the Community in each year.

Now the department has a truck dedicated to her.

One of the most unusual jobs Mary had as part of the Auxiliary was frying chickens for the Fourth of July fundraiser and cleaning up after.

Morgal laments the fact that many of the long-time members of the Auxiliary are dying off and not many new people are joining.

“Our numbers are low, 12 at most,” she said. “Nobody wants to volunteer anymore.”

That’s not from lack of appreciation.

“Mary Morgal has served in the Women's Auxiliary since 1960. She has mentored generations of first responders throughout her time and our department wouldn’t be where it is without her. [During Women’s History Month] we want to thank Mary for nearly 60 years of service.”

“She’s been such an important part of CJPVFD history,” Avery Comarow, public information officer for the department, said.