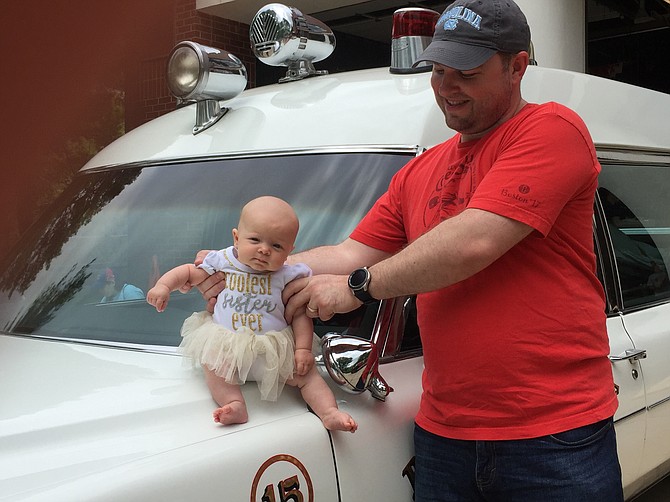 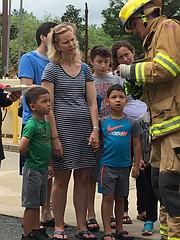 From right, Eva Seligson, Blanche Wong, and James Housel, all 2 years old, enjoy popcorn and a view of the demonstrations at the firehouse open house.

“I was working in Potomac,” she said.

Since going to the fire department’s open house, Piccardi has volunteered in the all-volunteer department since that 1999.

So many people attended the open house, held at the River Road station on Saturday, May 4, 2019, that volunteers directed traffic and helped visitors park safely along River Road.

Fire and rescue workers gave multiple demonstrations of the department’s work, including how to cut apart cars when the department responds to a critical automobile rescue.

Joshua and Jackson Bauduin, their mother Carolyn Bauduin, watched as Piccardi gave play-by-play analysis of how the volunteers would respond to a critical automobile rescue.

Khaghani has volunteered with the department for three-and-a-half years. Khaghani and many of his friends are kayakers and he wanted to get involved with swift water rescue. His interest in volunteering started with “the sense of wanting to give back to the community.”

“I get to take all these cool classes and the county is so awesome to train me,” he said.

“They do it because they love it,” said Piccardi.