Buses picked up the slack, leaving some riders happy. 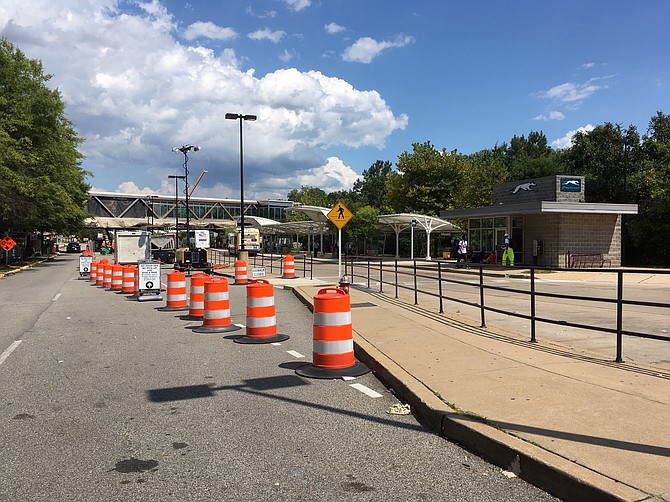 When Metro officials made the announcement last spring that six blue line stations were closing for the summer, ”Metro-geddon,” as it was called, 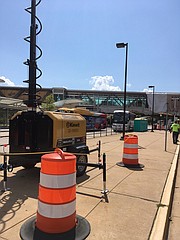 Cones and cranes will be at Franconia-Springfield Metro for a while longer.

didn’t turn out as bad as some thought it would. Buses packed the pick-up lanes and even DASH buses from Alexandria were seen on Franconia Road, heading to the station, but that’s soon to be a thing of the past. If all goes as scheduled, blue line trains will start running again on Sept. 8 and commutes will return to normal, even though the construction will continue.

“Pretty organized,” said Brett Robinson, a Franconia resident who found the directions at the Pentagon very helpful. “Plenty of signs,” he said.

Same with Yene Shewaneh, a Springfield resident that just started her job in July. “It’s very good,” she said. She hasn’t taken the train to her new job yet but she did hear there might be single tracking with the construction still continuing this fall. “I’m hoping it’s going to be good,” she said.

After Memorial Day last spring, the Summer 2019 Platform Improvement Project began, and all Blue Line stations south of Reagan National Airport were closed for renovations. Buses ran from the Pentagon to stations down the line and finally to the Franconia-Springfield station at the end of the Blue Line. Cranes, cones and dust were common sights as the riders got off buses and headed straight to the parking lots, where they got in their cars, met their rides or jumped in a cab.

“While Metro’s summer closing has been an unfortunate disruption to many of the community’s commuters, I’m pleased with the supplements in service that have been provided. We’ve received very little complaints and even a few compliments, which is a real testament to the County and Metro’s efforts.” said Supervisor Jeff McKay (D-Lee). “It is my hope that the community’s trust in Metro has not been lost and that, come September, its reliability and general operation is back on track,” he said.

As the stations are improved, the Metro experience for the riders will improve too, Metro says. “Once completed, customers will find more than just new platforms under their feet, as Metro is adding new features to improve safety, customer information and convenience while modernizing the stations,” Metro said.

Slip-resistant tiles will be a big improvement riders will notice right away. When the old tiles got wet, they became almost as slick as the Capitals hockey rink. In addition, there will be stainless-steel platform shelters upgraded with USB charging ports and digital displays, and LED lighting will be part of the upgrades as well.

Keith Forte lives in Woodbridge but works in Fairfax Station, so he uses the station as a transfer point, sometimes using Uber from there, although it isn’t cheap. “I’m going to look at my options,” he said.

White Top cab driver Kevin Beasley would like to see an improvement with the taxi cab line at the Franconia-Springfield station as well. “Lots of people, they can’t even see the taxis,” Beasley said.