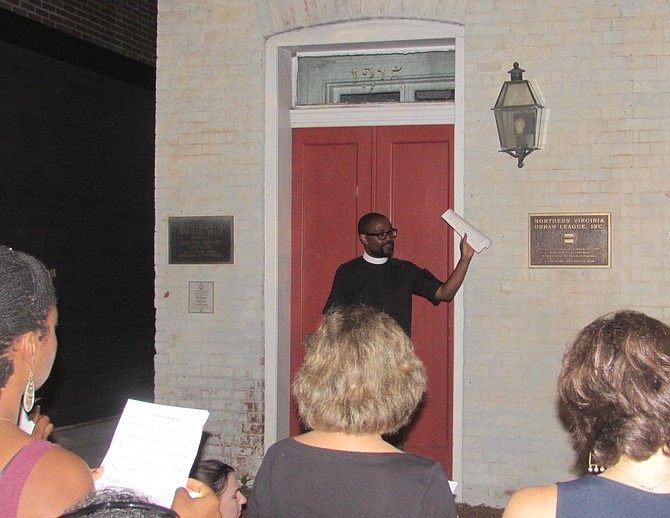 Participants of the Pilgrimage for Racial Justice march along Washington Street to Freedom House.

In August 1619, a group of privateers sailed into the mouth of the James River and landed at Point Comfort — an English foothold in the seemingly boundless tidal marsh of coastal Virginia. The colonists gathered to watch as 20 Africans bound in chains were forced out into the humid summer air. These men were sold to wealthy planters as property, becoming the first enslaved Africans in Virginia. The slave trade grew from there and soon many port cities, including Alexandria, were profiting by selling Africans into bondage.

The Pilgrimage for Racial Justice on Friday, Aug. 16, marked the 400th anniversary of the first enslaved African people to arrive in Virginia. The event was aimed to honor the thousands of Africans who suffered enslavement, as well as call attention to the role Alexandria played in the slave trade.

As the sun set Friday evening, around 100 people gathered for prayers and hymns at the Contrabands and Freedmen Cemetery Memorial on Washington Street, which serves as the final resting place for almost 2,000 escaped slaves. The crowd of local citizens, led by representatives from the Episcopal Diocese of Southwestern Virginia and Virginia Theological Seminary, then engaged in a silent march to the former Franklin & Armfield Slave Pen on Duke Street.

“It’s very important to commemorate 400 years of chattel slavery at the places where the horrific system is most felt,” said Reverend Kim Coleman, rector of Trinity Episcopal Church in Arlington. “It’s just another way we can make right what was wrong.”

The Franklin & Armfield Slave Pen, located at 1315 Duke St., was once one of the biggest slave trading companies in the nation. Issac Franklin, along with his partner John Armfield, leased the Duke Street building in 1828 to serve as a slave pen for enslaved Africans being shipped to the deep south. With the Atlantic slave trade declining in the early 19th century, southern planters became increasingly reliant on the domestic slave markets. In response to this increased demand, Slaveholders in the upper south, calculating that their slaves could sell for double the price in the deep south, began shipping thousands of enslaved Africans further south.

Alexandria became a major hub of the domestic slave trade, and by the 1830s, Frankling & Armfield were selling 1,000 people annually, with enslaved Africans from across Virginia, Maryland, and D.C. passing through the Duke street building on their way to slave markets in Louisiana and Mississippi.

Some of the enslaved people were taken south by boat, but many were forced to walk. Thousands of newly-sold enslaved Africans were chained together and subjected to forced marches down through the Shenandoah Valley. This practice was in use throughout the south up to the eve of the Civil War and it is thought that almost a million slaves were made to go south on foot, in what has been called “Slavery’s Trail of Tears.”

Friday’s silent march was intended to symbolize the forced march that many slaves undertook. “Why not walk so we can get a small idea of what it’s like to march for days and weeks against your will,” said Reverend Joseph Thompson, professor of Race and Ethnicity Studies at Virginia Theological Seminary.

Electric candles were handed out and the crowd marched wordlessly along Washington Street, before turning up Duke Street and stopping in front of the former Armfield & Franklin building.

Several members of Alfred Street Baptist Church, including Astrid Gilles, were involved in the march. “I wanted to participate because [the march] is one of the many ways groups can spiritually commemorate the history of [the slaves] originally brought to Alexandria,” said Gilles.

“The march itself was very powerful,” said Thompson, who was only expecting 20 to 30 people to show up. “Probably the more events of this sort that can be done, the better,” he said. “Events that make history visible.”