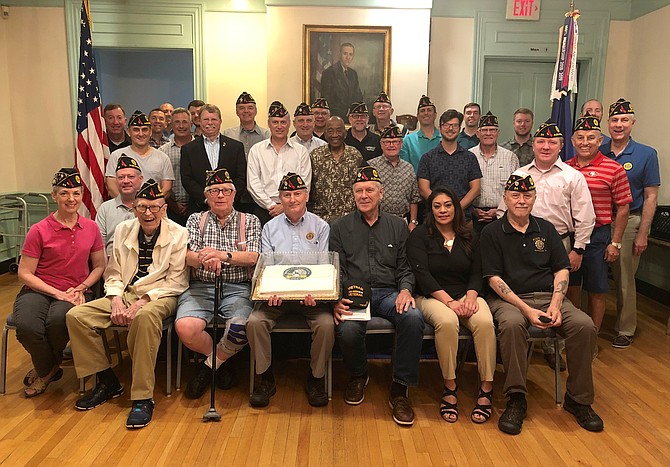 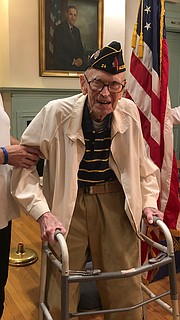 World War II veteran Philip Lundeberg celebrated his 96th birthday during the Aug. 14 meeting of American Legion Post 24 in Old Town. Lundeberg is the sole living survivor of the USS Frederick C. Davis, the last American warship sunk in the Battle of the Atlantic on April 24, 1945.

American Legion Post 24 marked the 100th anniversary of the founding of the Alexandria chapter of the veterans’ service organization on Aug. 14, kicking off a year-long celebration of events aimed at raising awareness of veterans’ issues.

“We decided on a 12-month celebration, because Post 24's application for a temporary charter began in August 1919 and was not made permanent until a year later,” said Post 24 Commander Henry Dorton, following a cake-cutting and toast by Legion members. “We plan to honor all the Post 24 Legionnaires who came before us, including those who saved Gadsby's Tavern from demolition. During this Centennial Celebration we also hope to raise awareness for what Alexandria Post 24 has done, and continues to do, for the community.”

In addition to marking the founding of the American Legion, Post 24 Legionnaires celebrated the recent passage by Congress of The LEGION Act, which revised the periods of eligibility for membership.

“The American Legion is our country's largest veterans organization with about 13,000 posts worldwide,” said Dorton, who also noted that Virginia is home to the seventh largest population of veterans in the country. “The periods of eligibility for membership are congressionally chartered. The bipartisan bill recently signed by the President enables all veterans who served since Pearl Harbor to be eligible to join The American Legion.”

Prior to passage of The LEGION Act, which stands for “Let Everyone Get Involved in Opportunities for National Service,” veterans who served during the Cold War and other times outside of the recognized periods of war were excluded from membership.

President Donald Trump signed the bill on July 30, expanding eligibility for membership. Prior to the LEGION Act, if veterans wanted to join The American Legion, they had to have served during one of the six federally-designated eras dating back to America’s declaration of war on Germany during World War I. Because The American Legion is a congressionally-chartered veterans service organization, Congress determines its membership eligibility.

With passage of the new legislation, The American Legion’s eligibility criteria immediately changes from six war eras to two — April 6, 1917, to Nov. 11, 1918, and Dec. 7, 1941 — to a time later determined by the federal government. No other restrictions to American Legion membership are changed. Many of the gaps between those recognized eligibility periods were during the Cold War, when an estimated 1,600 U.S. service members were killed or wounded in hostile operations.

Chartered by Congress in 1919, The American Legion works to serve the community, state and nation through its four pillars of Veterans Affairs & Rehabilitation, Americanism, Children & Youth, and National Security.