Susco ran a half-marathon or full marathon in all 50 states to honor his brother, and encourage organ donations. 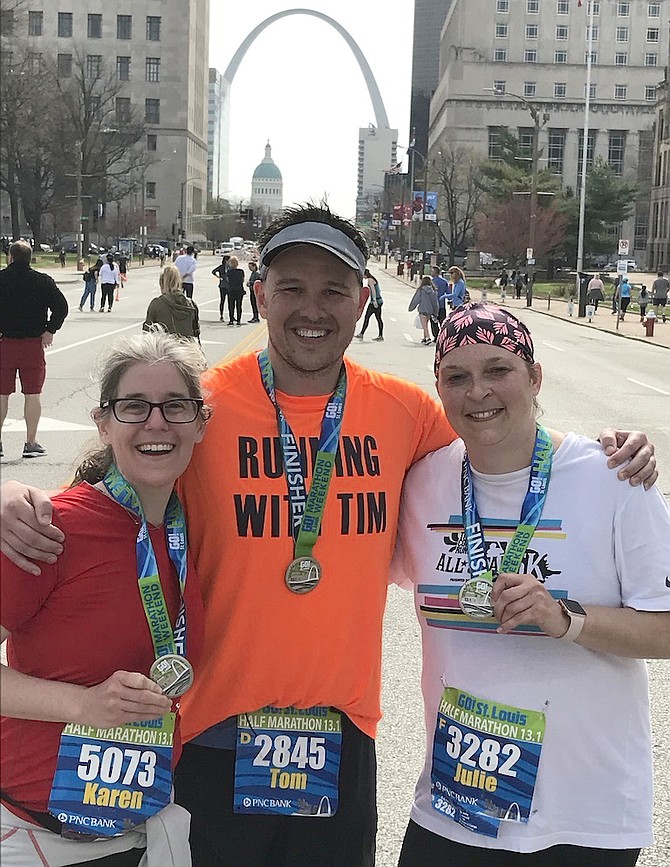 In St. Louis, Missouri, Tom Susco of Arlington finishes his quest to run a marathon or half marathon in every state and D.C. in honor of his brother Tim, raising awareness for brain aneurysms and organ donation. It took eight years to complete. Photo contributed 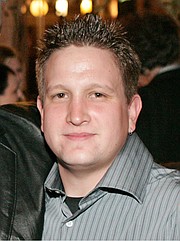 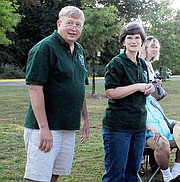 Nancy and Tom Susco in Reston in 2012, cheering on race participants at the start of that year’s Susco 8K race held in memory of their son, Tim Susco, who died of a brain aneurysm in 2007 at the age of 25.

Despite how strong we are in personality, character – or even how powerful we seem physically – we are forever at the mercy of a functioning brain, a steadily beating heart, regular blood flow, and more.

Arlington’s Tom Susco understands the fragility of life all too well. Twelve years ago, his younger brother Tim – who was just 25 years old at time – unexpectedly died after an aneurysm ruptured in his brain.

“Tim’s death was a complete shock to all of us,” Tom recalled. “We had no idea that Tim had a brain aneurysm, and, to our knowledge, he’d never experienced any symptoms of one. So, when it ruptured and he fell into a coma, it completely hit us out of left field.”

Tim Susco was a 1999 South Lakes High School graduate. Susco ran Track and Cross Country every season of his four years at SLHS according to his brother, Tom. In August of 2007, Tim worked in Hollywood as a Key Assistant Location Manager on the television show, "Heroes." While out scouting for a location that month, Tim suffered what would be a fatal brain aneurysm.

“A few weeks before it happened, Tim seemed completely normal, happy and healthy. Then we got a call completely out of the blue that he was in a coma. Four days later, he passed away, and it created such a big void in our family. For 25 years, it was the four of us. Then all of a sudden, we lost such an integral part of our family.”

As Tom, who lives in Arlington, and his parents prepared to bury their brother and son, the only thing that offered some solace to the Suscos was knowing there was something they could do to honor Tim and his selfless spirit: donate his organs and save other lives on his behalf.

“Organ donation can be a very difficult and emotional decision,” Tom said. “Thankfully, when Tim and I were in high school, we discussed organ donation with our parents. So, we knew that Tim wanted to be an organ donor. Being able to respect Tim’s wish to donate his organs and give the gift of life was so important. Thanks to my brother, five people received much-needed, life-saving organs that dramatically improved their quality of life. Seeing how Tim’s ultimate gift helped these five people and their loved ones gave me a semblance of peace, knowing that he was able to help so many people.”

In the months following Tim’s death, Tom Susco also found peace in putting one foot in front of the other – literally, running. Logging miles helped him recover emotionally and feel a bit closer to the brother he lost.

“Tim was the runner when we grew up,” Tom said. “He ran track and cross-country all four years of high school. I was definitely not a runner and really wasn’t into physical activity until many years later. I really didn’t take up running until after he died. I took up running to be by myself, to escape the world around me and process my grief. Although I wasn’t fast and didn’t go far at first, the more I kept at it, my fitness improved, I became faster, I could run farther, and running became not just an activity I needed, but an activity I enjoyed.”

Blending his passions, Tom was also able to use running to bring attention to organ donation. In 2011, he established a goal that would go on to define the next eight years of his life: to “run a half-marathon or marathon with Tim in all 50 states (and the District of Columbia)” – all to shed light on Tim’s story.

And after crossing the finish line of the Rock ‘n’ Roll Half Marathon in Denver, Co. in October 2019, Tom has officially accomplished his goal.

“In May of 2011, I decided to make a goal to run at least a half-marathon in every state, plus DC, and that I would dedicate it to Tim,” Tom said. “I booked my first official race in this journey in Mahomet, Illinois, in August 2011. Through it all, my primary focus has been to raise awareness for brain aneurysms and organ donation through sharing Tim’s story. Setting such a big running goal has allowed me to keep a spotlight on Tim over the last eight years – not only about who Tim was as a person, but also about the hidden dangers of brain aneurysms and the benefits of organ donation.”

TOM’S NATIONAL half-marathon undertaking isn’t the only running he’s been doing. In 2007, he and his parents established the Susco 8K run, an annual road race to raise funding for the Brain Aneurysm Foundation – a national non-profit organization that conducts life-saving research – and for the Washington Regional Transplant Community (WRTC), the organization that facilitates organ and tissue donation throughout the Washington DC-metropolitan area. These are the same organizations that have benefitted from Tim’s half-marathon fundraising.

“WRTC is the federally-designated organ procurement organization for the metropolitan Washington, D.C. area,” said Jecoliah Ellis, Washington Regional Transplant Community’s media relations and communications manager. “It is a non-profit organization responsible for recovering and distributing organs and tissues used in lifesaving and life-enhancing transplants, as well as medical research and therapy. Today, WRTC recovers kidneys, livers, lungs, the pancreas, the small intestine, the heart, the eyes, and tissues to heal patients. Currently, WRTC serves approximately 5.5 million people, 44 hospitals and six transplant centers. It also educates the public about organ, eye and tissue donation with the goal of increasing the number of registered organ donors, and ultimately, saving more lives.”

“We wanted to improve awareness of organ donation in our local community, so we began a relationship with WRTC,” Tom said. “I’ve thought of my personal running journey as an adjunct to the Susco 8K, so I’ve encouraged donations to be made in conjunction with our family’s race.”

Through his half-marathoning, the Susco 8K, and more, Tom has done a lot for Washington Regional Transplant Community.

“We’ve worked hard to make Tim’s race as successful as it could be in terms of financial donations,” Tom said. “We’ve also increased our participation and activism with WRTC, by sitting on WRTC’s Donor Family Council and volunteering at local awareness events. I’d like to think I’ve brought light, at least in my community, to the hidden dangers of brain aneurysms as well as the benefits of organ donation and giving the gift of light.

“Over the past 12 years of Tim’s race, our family has raised over $500,000, which was split between brain aneurysm research and organ donation community awareness programs.”

Tom has gotten a lot of fulfillment from the charitable work they’ve done. His efforts have certainly meant a lot to the Washington Regional Transplant Community, too.

“WRTC is grateful that Tom had the brilliant idea to participate in marathons as a platform to raise awareness about the crucial importance of registering to be an organ, eye and tissue donor,” Ellis said. “The impact that Tom has made sharing the donation message in each of the 50 states is immeasurable. Running in memory of his brother Tim, who saved several lives as an organ donor, is such a meaningful way to honor Tim and keep his memory alive.”

When he first set out to run with Tim in all 50 states, it was impossible to predict everything he would achieve – especially not with regard to the bond he still feels that he has with his brother.

“As cliché as it sounds, the best part of running all 50 states was the journey, and not the end goal,” Tom said. “So, it quickly became not about finishing this goal as quickly as I could, but instead about enjoying the journey and picking the best races to run, in the most fun places to travel. This was about sharing an experience with Tim that I never was able to share with him while he was living. He was with me every step of the way, celebrating and enjoying the highest of the highs and motivating and pushing me through the lowest of the lows.”

Tom found himself channeling his late brother many times over the last eight years.

“TIM STUDIED FILM and media arts in college – a field so different from the jobs that anyone in my family ever had,” Tom said. “Tim worked hard to move up in the tough business of television and film production, and when he knew that the only way to reach his goals was to move to Los Angeles, he packed up and moved, knowing barely anyone there who could help him. It’s that drive, determination, shoot-for-the-stars mentality that he has given me throughout this journey.”

Now, with more than 668.1 race miles in his rearview mirror, Tom is not spending his holiday season plotting his race schedule for the next year.

“This is the time of year that I typically would plan out next year’s race calendar, so it’s a little weird to have nothing planned – at least nothing set in stone quite yet,” Tom said. “For eight years, I’ve had this checklist to follow and there are only so many ways you can schedule races in six to seven states a year. For example, Alaska only holds half-marathons a few months a year.

“This is an opportunity to begin a new chapter. I have the flexibility to run bucket-list races, to revisit a state or rerun a race I enjoyed, or even run internationally.”

While Tom is taking a break from the half-marathon distance, he will not be easing up on his work with Washington Regional Transplant Community.

“My involvement with WRTC will assuredly continue,” he said. “My particular focus is to improve community awareness of the benefits of organ donation. My parents and I will certainly be volunteering at local awareness events and sharing Tim’s story as much as we can.”

For the information you need to make a legal and informed decision about becoming an organ donor, visit Washington Regional Transplant Community’s website, BeADonor.org.