Works by seven local and talented quilters on display – a must-see event. 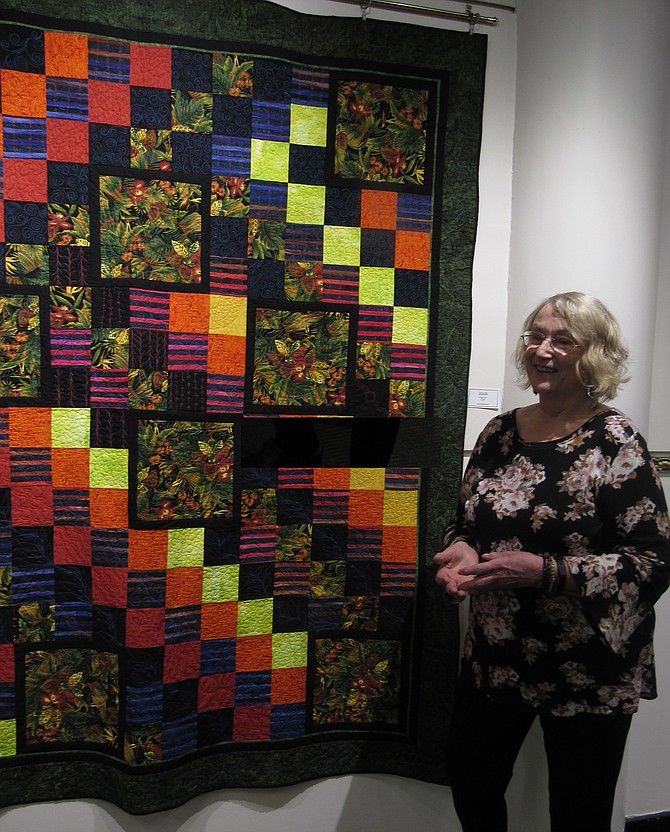 Gloria Morrow, Arts Education Assistant, Reston Community Center, discusses one of the quilted fabric works, "Jungleland,” created by Ruth Grubb of the Town of Herndon and featured in the Group Exhibit, "Through the Eye of the Needle II," by the Cotting Quilters. The show runs Feb. 4–March 3, 2019, in the Jo Ann Rose Gallery, RCC Lake Anne, Reston. Photo by Mercia Hobson. 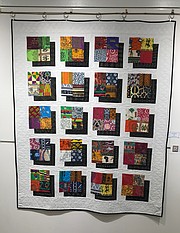 "African 4-Square Float," is a modern quilt created by Hannah Hamilton, Sterling, and displayed in the Group Exhibit, "Through the Eye of the Needle II," by the Cotting Quilters. “I like to play with color; usually, bold colors,” said Hamilton.

Following their successful 2016 Group Quilt Show in the Jo Ann Rose Gallery, Reston Community Center Lake Anne, the Cotting Quilters of Reston and Herndon are back Feb. 4–March 3, 2019, in their second exhibit, "Through the Eye of the Needle II." Individual works by the seven quilters, nearly all for sale, celebrate modern and traditional designs.

On some modern quilts, such as “Jungleland” created by Ruth Grubb of the Town of Herndon, the fabric art is composed as she said, “In bold colors and prints, with the colors of the smaller blocks drawn from the jungle print’s greens, purples, oranges, and yellows. I designed and pieced the quilt. Connie Wright-Zink quilted and heightened its contrast on her long arm quilter.”

THE QUILTERS designed their works without hard and fast rules according to Reston Community Center. Fabric artist, Hannah Hamilton of Sterling is one of those quilters. Describing her African 4-Square Float quilt, Hamilton said, "I like to play with color; usually, bold colors and I prefer modern, clean designs. I usually don't follow the rules other than measure at least twice and cut once. I try to make quilts that bring joy and are interesting to the eye. To me, making quilts is about self-expression."

While on some quilts, deliberate high contrast and alternate grid work grab the viewer's eye, on others – such as "Koi Pond" by Anita Lowen of Reston – inspiration, chance and the use of creative forces profoundly influence the outcome.

“My Koi Pond quilt was inspired by the koi pond at the Pagoda Hotel in Honolulu, Hawaii," said Lowen. "Earlier I had been lucky enough to find koi fabric at a small quilt shop in Kauai. The three appliquéd koi were a challenge. A daughter created the large koi pattern, and after cutting the shapes, I carefully blotted areas with bleach to produce the varied coloration of the ‘scales.’ I hoped to create a quilt that captured the motion of the koi as they glided through the water,” said Lowen.

Anderson's works and those of the other members of the Cotting Quilters exude an overall freshness and collective creativity. The seven exhibitors are Dora Anderson, Barbara Happ and Anita Lowen of Reston, Ruth Grubb of the Town of Herndon, Hannah Hamilton of Sterling, Nicky Moering of Manassas, and Connie Wright-Zink of Middlebrook, Va.

THE COTTING QUILTERS is a loosely formed group of individuals with a passion for quilting. The members named it in honor of their friend and fellow quilter, Christine Cotting who passed a few years ago according to Grubb.

Nearly all quilts in the exhibit are for sale. Admission to the gallery is free and open to the public. Housed in the RCC Lake Anne Community Center, the Jo Ann Rose Gallery is open during the center's regular business hours: Monday – Saturday: 9 a.m. – 9 p.m. and Sunday: 9 a.m. – 8 p.m.