‘You Can Tell How Beloved He Is’ in Fairfax
Votes

‘You Can Tell How Beloved He Is’ in Fairfax 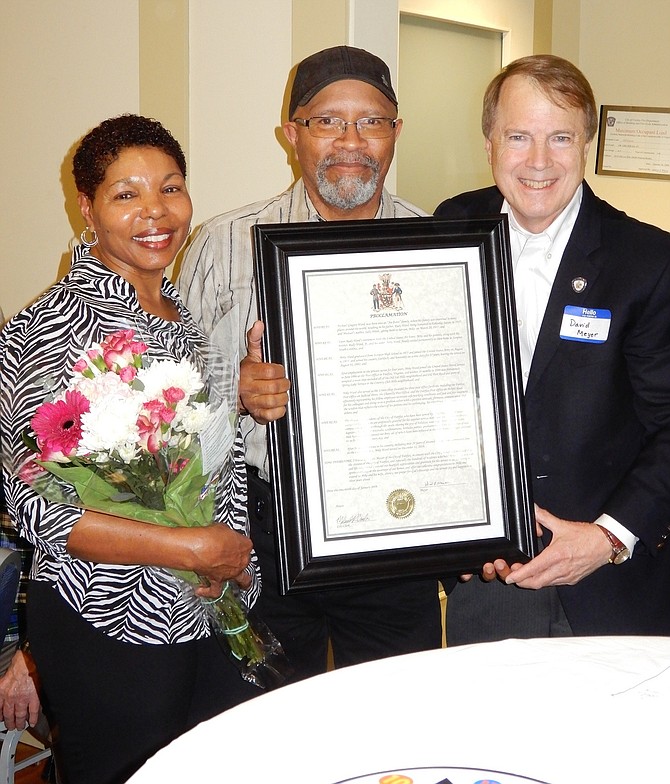 (From left) are Shirley and Mike Ward with Mayor David Meyer and the proclamation of appreciation he gave to former mailman Mike Ward. Photo by Bonnie Hobbs.

“Everyone loves him – he’s like family. He even knew everybody’s pets by name.” —Connie Greenfield

Mike Ward’s wife told him they were going to historic Blenheim for a wine-tasting. But when they arrived Sunday afternoon, Jan. 20, more than 200 people were there to surprise him with a party in his honor.

Ward’s not a famous athlete, singer or movie star. But to the residents of Fairfax’s Old Lee Hills community, he’s their own celebrity – their beloved mailman for the past two decades, until he retired in December.

“He became friends with everyone in the neighborhood,” said Connie Greenfield, who grew up there. “Everyone loves him – he’s like family. He even knew everybody’s pets by name.”

When people heard about Ward’s party, she said, “A couple who were going on vacation changed their plans to attend. And the wife of a 98-year-old man told me, ‘If he has to crawl, he’ll be there.’ Everybody wanted Mike to know how much we love him and how much we’ll miss him.”

“He was really friendly, always smiling and having something nice to say,” said longtime resident Patrick Segui.

“I always felt so bad for him because, when I had a hair salon, I got so many magazines sent to me that I felt bad he had to carry them all,” added Segui’s wife, Kaija. “So we’re happy for him.”

Jeff Yost and his wife have known Ward, almost 62, since their children were born – and they’re now grown. “He’s a wonderful, positive, pleasant man,” said Yost. “You couldn’t ask for someone better than Mike. He’s also seen some of our dogs come and go. Even though they’d loudly announce his presence every day, we knew that, deep down inside, they loved him, as do we.”

Cathy Gardner said Ward and her dog Frankie had a “real relationship. Frankie thought she was powerful because, every time she barked like a lunatic at him through the window, he’d leave. I miss him delivering our mail; he answered any questions and concerns I had, and I knew I could trust him.”

Allie and Dan Vess described Ward as always pleasant and smiling. “We both work from home, so we saw him every day and looked forward to it,” said Allie. “I always knew when he was on vacation, because we’d get mail mistakes. He was more than a mailman; I consider him a friend. I made him homemade cookies every Christmas.”

She said Ward had a big heart and is “one of the kindest people I ever met. We wish him the best in retirement, but it won’t be the same.” Gesturing toward the crowd at his party, she said, “Look at this turnout – you can tell how beloved he is.”

Ward’s neighbors, Robin and Chris Burke, were also there to celebrate him. “We went to school with Mike’s wife Shirley and met Mike when we moved to that subdivision, 15 years ago,” said Robin. “Mike’s always willing to do whatever’s needed for anybody at any time. And he loves to eat; we do dinners and vacations with him and Shirley all the time, including several cruises.”

Her husband Chris said he doesn’t have any brothers, so Ward is “like a brother to me. He’s a good guy, and easygoing. Whenever either one of us is away and it snows, we take care of each other’s driveways.”

The Wards have been married nearly 17 years, and Mike served 17 years in the Army before joining the Post Office, 22 years ago. He delivered mail in Old Lee Hills since 1998, and Shirley was a mail carrier in Fairfax’s Maple Hill subdivision until she retired, two years ago.

“We were initially both going to retire together, but he wasn’t ready,” said Shirley. “I think the people on his route kept him from retiring early. He’d come home and tell me stories about them and their puppies. But he did it now because we wanted to start traveling.”

Even Fairfax Mayor David Meyer attended the party. “I don’t think I’ve ever seen so many people together in Old Lee Hills,” he said. “This gathering speaks volumes about how we feel about Mike Ward.” Meyer then read a proclamation he wrote about Ward and presented it to him.

He noted that Ward served as union shop steward for the Chantilly Post Office, plus the Fairfax post offices on Judicial Drive and on Pickett Road, “effectively representing his fellow employees to ensure safe working conditions and just and fair treatment for his colleagues.” Meyer described him as a “problem-solver with a positive attitude, firmness, common sense and wisdom that reflects the values of his parents and his upbringing, his experience and concern for others.”

He also said the thousands of City residents whose mail Ward delivered are “profoundly grateful for his superior service every day, for his concern for and compassion to all of us through the years, sharing the joys of holidays, weddings, anniversaries, births, baptisms, bar and bat mitzvahs, confirmations, birthday parties, graduations, and the difficulties of loss that have also accompanied our lives,”

Therefore, said Meyer, “On behalf of the City Council, all the citizens of the City of Fairfax, and especially [those] who hold Mike Ward as a dear and lifelong friend, I extend our heartfelt appreciation and gratitude for his service to us, for lifting our spirits every day at the doorsteps of our homes. I offer our collective congratulations and extend to Mike and his wife Shirley our prayer for God’s blessings and the utmost joy and happiness in their years ahead.”

Afterward, Mike Ward told the crowd, “Thank you, guys, from the bottom of my heart, for the best darned neighborhood in the best darned city in the world.” And his wife thanked Greenfield and her mother Mary and their committee for organizing the event.

“One of the things I love most about Mike is his honesty, integrity and commitment, and I guess all these people here see what I see,” added Shirley Ward. “And I think it’s wonderful that the whole community turned out. Mike and I had a longstanding competition about who was the best mailperson, but now I guess I’ll have to concede.”

Calling the celebration in his honor “overwhelming,” Mike said, “I couldn’t even dream this would happen; it’s amazing. This was like my neighborhood, and my customers were like family. We joked with each other, and I knew all their dogs. It was almost like this was meant to be and this was where I was supposed to be.”

He said his favorite memories are of all the children growing up. “When I started the route, it was mostly retirees, but then it changed, and now it’s a younger crowd and people having babies,” said Ward. So what gave him the most satisfaction? He replied, “To see all those folks here and know they appreciated what I did.”