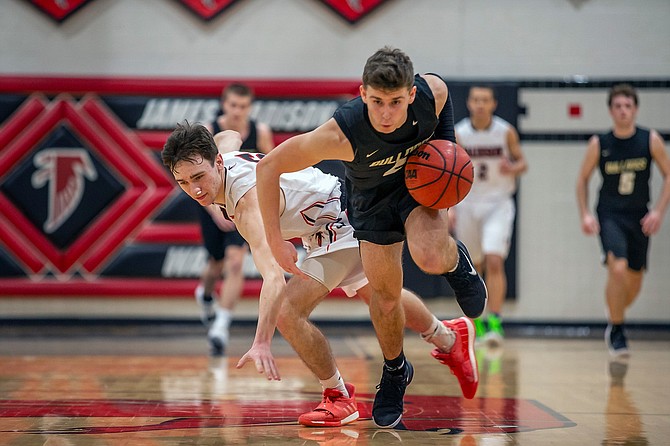 Westfield’s Taylor Morin #2 takes the ball from Madison’s Aaron Thompson #5 before a fast break. Photo by Will Palenscar 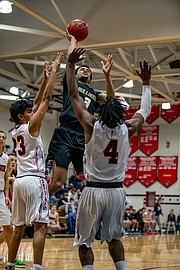 Marshall Reed #3 elevated Westfield over Madison in a 1st round Concorde District Tournament. 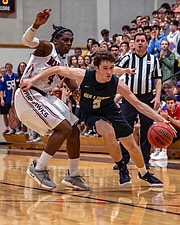 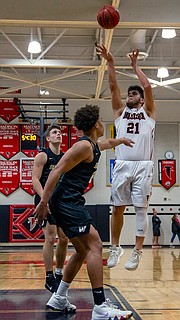 The Westfield Bulldogs traveled to Vienna to take on the Madison Warhawks in the 1st round of the Concorde District. The Bulldogs lost both regular season games to the Warhawks, 66-56 and 61-44.

In the opening quarter, the Bulldogs narrowly outscored the Warhawks 13-10 behind Tahj Summey’s 6 points and Gavin Kiley’s 4 points. Madison was led by TJ Ulrich and John Finney who each connected from long range for 3 points each in the quarter.

In the 2nd quarter, Westfield again outscored Madison, this time 8-7 giving the visiting Bulldogs a 21-17 halftime advantage. Marshall Reed scored on a traditional 3 pointer while Tahj Summey scored his 3 points from long range. Madison was led by TJ Ulrich who connected on his second 3 pointer of the game.

The Bulldogs would not be phased, having their most productive quarter in the 4th. The Bulldogs got to the charity stripe 12 times making 7, Taylor Morin going 4-4, Gavin Kiley 3-6, and Marshall Reed 2-4. Marshall Reed paced the Bulldogs in the quarter with 6 points, while Kiley added 5 points and Morin added 4. Madison was led by Harrison Patel who converted a 3 pointer.