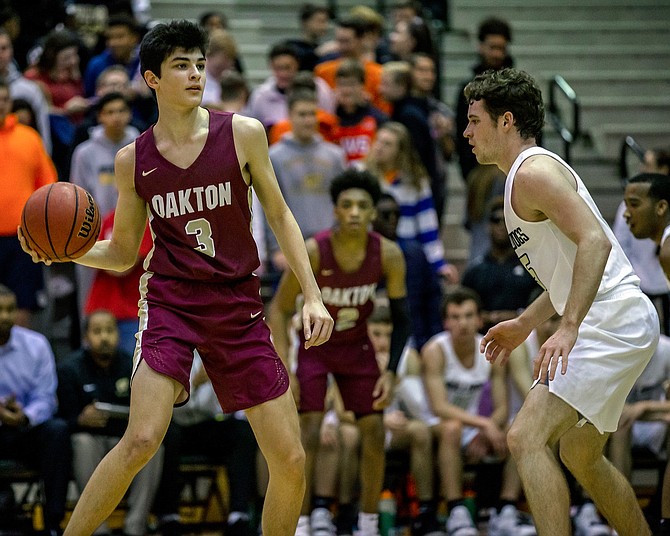 Garrett Johnson #3 looks to pass the ball to a teammate as Gavin Kiley #5 defends. Photo by Will Palenscar/The Connection 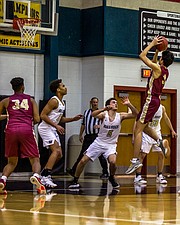 Garrett Johnson #3 pulls up for a jump shot. Johnson finished the game with 18 points. 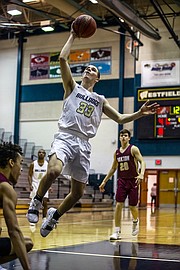 Sam Johnson #33 lays in two of his 9 points in game with Oakton.

The Oakton Cougars traveled to Chantilly to take on the Westfield Bulldogs on Jan. 22. The Bulldogs opened a 11-9 lead after playing the first eight minutes. Tahj Summey scored 5 points in the quarter while teammate Sam Johnson added 4. Oakton’s Max Wilson would lead all scorers with 6 points.

In the 2nd quarter Oakton recovered from the deficit to take a 22-15 halftime advantage behind Garrett Johnson’s 5 points. Micah Johnson-Parrotte and Max Wilson each added 4. Westfield’s only scoring came from Trent Reimonenq and Jalen Pinna who each scored 2 points.

In the 3rd quarter Westfield cut the deficit to 1 point outscoring the Cougar’s, 16-10. The Bulldogs were led by Jalen Pinna’s 7 points. Oakton was led by Garrett Johnson and Max Wilson who each scored 4 points.

With a 1 point lead, 32-31 to start the 4th quarter, the Cougars again outscored the Bulldogs 16-13, for a 52-48 victory. Oakton’s Garrett Johnson would add 6 points for the quarter, giving him and teammate Max Wilson 18 points for the game. Westfield was led by Jalen Pinna and Tahj Summey who each scored 11 points.