Inside ‘The Enchanted Bookshop’ in Arlington
Votes

Inside ‘The Enchanted Bookshop’ in Arlington

Children’s play where, at night time, the characters inside the books come alive. 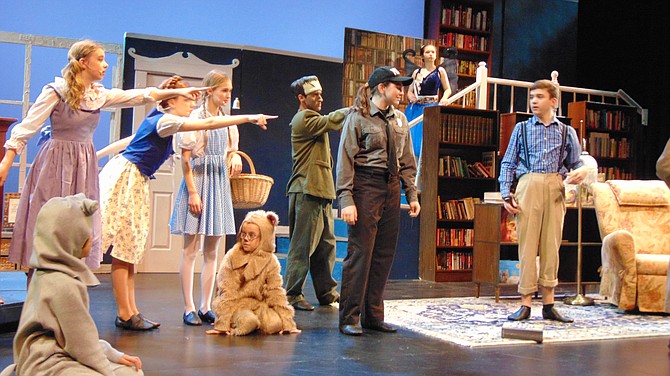 The cast rehearses a scene from Encore Stage & Studio’s production of “The Enchanted Bookshop.” Photo by Steve Hibbard.

With a cast of 26 children, the Encore Stage & Studio is presenting "The Enchanted Bookshop" running now through Jan. 20, at Gunston Arts Center - Theatre One in Arlington. During the day, A Likely Story may look like any other used bookstore. But at night, it’s a place where magic happens. That’s when the characters inside the books come alive. The children’s play is written by Todd Wallinger. Founded in 1967 Encore Stage & Studio is a “Theatre by kids, for kids.”

Having worked with Encore for 14 years, she said the challenge was working with a wide age range of children (ages 9-16) who have a variety of acting experience. “Another part to it would be the casting of the children — those with experience acting and those with experience with our company in roles where they can feature what they’ve learned but also support students who are learning the acting process,” she said.

Assistant Director Amanda Nell, 24, of Cheverly, Md., added: “I think that with the wide age range and experience level that some of the students come with, there could be an element to making sure that those with more experience are being challenged, while those who are new to the process are learning the basics as well as adding to the show as a whole.”

For audience takeaways, Conrad said: “My goal is that the audience feels like they are part of the magic of the bookshop and they can come to life with the characters from the stories as they save Margie’s bookshop.”

Emmie Vajda, 14, of Arlington is playing the role of Dorothy Gale. “My character is one of the book characters who comes to life at night in the bookstore. My job is I try to help Miss Margie save the store because there are three thieves who come in and try to steal a necklace,” she said.

She added: “I wanted to get into my character as much as possible and embody my character. Dorothy is passionate and she’s brave and clever, so I have to be all those traits when I’m acting as Dorothy.”

Sydney Payne, 12, of Alexandria is playing the role of Pollyanna. “Pollyanna is a very optimistic person. She’s always trying to look on the bright side of everyone. She cares about her friends and she just wants to make everyone happy,” she said.

As far as challenges, she added: “She’s a well-known character so I wanted to become her when I’m on stage. Everyone has a bit of Pollyanna in them so I wanted to show that. She’s a really happy person — constantly smiling.”

Xander Tilock, 14, of Falls Church is playing the role of Tom Sawyer. “Tom Sawyer is a slightly childish and very adventurous, and he’s a fun character. He has the bravery to challenge the villains when they attack the bookstore. However, he also shows his youth sometimes — telling little jokes. Deep down he has a moral compass, and he truly evolves into someone more wiser and mature. He makes the right choices,” he said.

He added: “Throughout the rehearsal process I feel I built him as a character and a person to the point where on stage, it feels natural to be Tom Sawyer — to portray who he is as a person.”