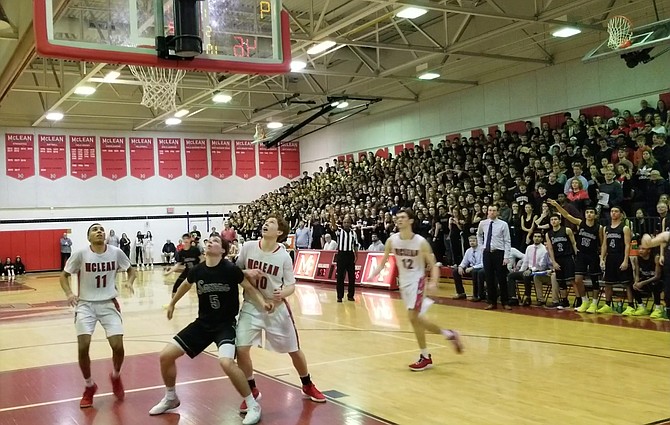 McLean guard Matias Prock dribbled the ball between a defender’s legs to the delight of the Highlander student section in the closing seconds of the opening quarter of Friday’s rivalry game against Langley.

Prock then passed to senior Evan Stout, who knocked down a 3-pointer, giving McLean a 17-point lead as the Highlander crowd erupted.

For Prock and Stout, this was the opening act on a night when the duo would combine for 47 points. After a Langley comeback, the McLean seniors finished the show by putting the game away in the fourth quarter.

Stout and Prock combined for 14 points in the final period and the Highlanders held on for a 67-58 victory over Langley on Jan. 11 at McLean High School.

Either way, it was the play of the night.

“I think Evan finishing the [3-pointer],” Prock said, “was better.”

Stout scored 12 points, including a pair of 3-pointers, during the first quarter as McLean built a 26-9 advantage. Langley chipped away at the lead and pulled to within two, 47-45, by the end of the third quarter. The Highlanders responded by opening the final period on an 8-0 run – including six points from Stout – to put the game away.

“At the end of the third quarter, I challenged them as far as, we’re a senior-laden team,” O’Brien said. “We can’t all of the sudden be nervous and tight because we’re in a tight game and [Langley] made a comeback. Evan Stout ended up being the one who got the benefit of the open shots and he knocked them in and he knocked free throws in at the end, as well.”

“I just wanted to attack the rim,” Stout said, “… just do anything to win.”

Prock added 21 points for the Highlanders.

“I described Matias as crafty for years, but he’s really taken a step up this year,” O’Brien said. “He has sort of taken the role of when we need a bucket, he kind of steps up and knows that he needs to make that bucket to break the streak that [the opponent is] on.”

Sophomore guard Jiaan Sehhat led Langley with 14 points, including four 3-pointers. Aryaman Suri and Nick Gasparis each knocked down a trio of 3-points and scored nine points for the Saxons.

The Saxons trailed 39-26 at halftime but outscored the Highlanders 19-8 in the third quarter to pull within two.

Langley would get no closer, however, and the McLean student section waved at Saxon fans as they headed to the exits late in the fourth quarter.

“I give [the Saxons] credit for making adjustments at halftime,” O’Brien said, “and coming back the way they did in that third quarter.”

McLean improved its record to 7-4, including 2-0 in the Liberty District. The Highlanders were scheduled to face Washington-Lee on Tuesday, after The Connection’s deadline. McLean will travel to face Yorktown at 7:30 p.m. on Friday, Jan. 18.