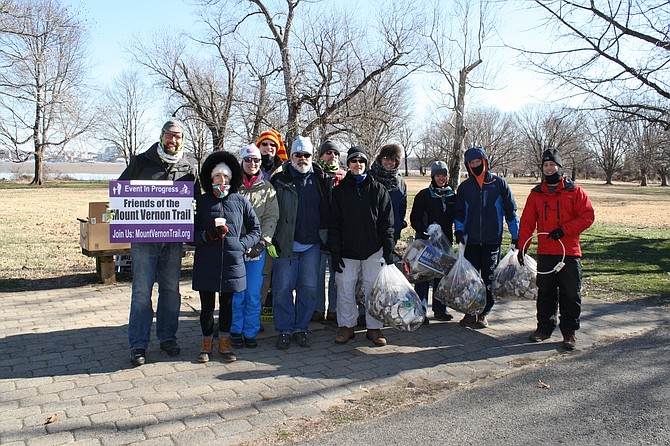 Despite the freezing temperatures on Monday, Jan. 21, the Friends of the Mount Vernon Trail came out to celebrate Martin Luther King Jr. Day and

Tools of the trade on MLK Day along Mt Vernon Trail

pick up trash, filling 36 bags to help maintain this thoroughfare along the Potomac River.

“It’s a day of service,” said Judd Isbell, an Arlington resident that uses the trail regularly. “This is probably the best trail in the nation,” he added, “we saw bald eagles today.”

“It’s all our trail,” added Alexandria resident Erin Meter, who dug out her ski pants for the day which was windy with the temperatures in the teens before counting in the wind chill. Others had ski masks, gloves, hats and boots.

“We cycle in this weather all the time,” added Dana Bres.

This Martin Luther King Jr. Day event was the second year in a row they cleaned the area, which started at Belle View Park and branched out from there. The Friends group had put the word out and only had four members cancel because of the weather, but others joined at the last minute because their originally planned event was cancelled due to the weather or the Federal government furlough. “We got people from other events,” said Meter.

The bags filled the back of Todd Weiser’s truck, an Alexandria resident who is part of the Friends group. The trash included the basics such as water bottles and fast food wrappers, but also “lot’s of Styrofoam,” said Collier Cook. “I found a quarter of a lime which I thought was weird,” said

Despite the freezing temps, the Friends of the Mt Vernon trail picked up a truckload of trash, which Todd Weiser hauled out.

Martin Luther King, Jr.’s birthday was made a Federal holiday in 1983, and in 1994 Congress designated the event as a national day of service. Each year, on the third Monday in January, the MLK Day of Service is observed to “empower individuals, strengthen communities, bridge barriers, create solutions to social problems,” according the Corporation for National and Community Service.