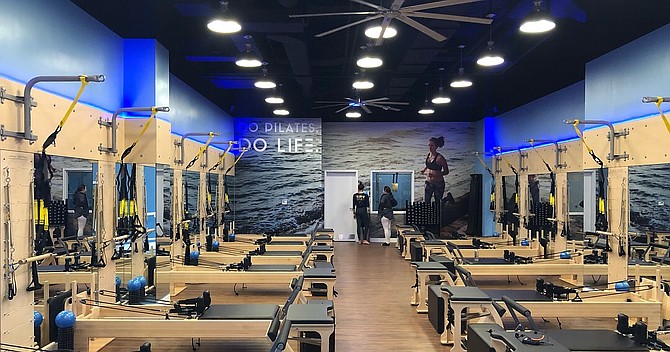 Club Pilates is now open in Tysons, just off Tyco Road. The second location for owner Michael Grams, the 2,150 square foot facility features the “Reformer” method of Pilates, and incorporates a variety of other equipment. “The instructors are passionate about Pilates and really love to see people gain from the experience,” said Studio Director Tara Clouse. Photo contributed

It’s called the nation’s largest Reformer-based Pilates franchise, and the “reformer” tag refers to the equipment being used, not a religious or political persuasion. Still, Tara Clouse, the Studio Director at the newest edition to the Club Pilates franchise says that a Pilates workout can be a spiritual experience,

The Reformer is a narrow sleigh-bed looking apparatus designed by Joseph Pilates, the founder of the Pilates method, and powered by the user’s own body weight and a set of springs attached to both the platform and the carriage. It’s also what’s being used to fuel the classes at the new club, just opened at 1521 Boyd Pointe Way, Suite B, in Vienna – right in the heart of Tysons Corner.

Throw away your old notions of Pilates as a purely mat-based meditational method of exercise, although mats and meditation can both be found at Club Pilates Tyson. Instead, holding true to founder Pilates’ original Reformer-based techniques, this club enhances the traditional 50-minute group activity by incorporating 11 different pieces of equipment along with the Reformer, including the EXO Chair, TRX, Bosu Ball and more.

“Don’t let any of that scare you away,” said Clouse at the official Grand Opening on the weekend of Jan. 19-20. “That means there is something for everyone, classes that fit all levels, from the most basic of beginners to the most advanced and physically fit.”

With these options as part of the classes, it also means a workout that can be more fun, time-efficient, dynamic and effective than either a strictly traditional gym workout or a session on the Pilates mat, according to Clouse, and club owner Michael Grams.

D.C. native and entrepreneur Grams also owns the Club Pilates in Pentagon City, that launched the franchise and the exercise method in the DMV. With the opening of his second venue, there are now 10 Club Pilates-franchised studios in the area.

“That’s how popular this hybrid workout has become,” said Grams, who expects to see at least 18 such studios open around the region before long.

“It’s a workout like nothing you’ve tried,” Grams says. “Club Pilates merges a variety of exercises that complement the traditional Pilates practice…resulting in a significant difference in your posture, balance, flexibility and strength.”

Clouse and Grams also praise the Club Pilates offerings as ideal for those recovering from injuries. “After all that’s why Pilates originally invented the exercise system,” Clouse notes, referring to the fact that Pilates said his inspiration came to him while he was being held at an internment camp during World War I. Pilates developed his method there over four years to help his injured fellow internees.

The folks at Club Pilates Tysons invite the public to visit their 2,150 square foot facility and to try out a beginner’s class for free. A Club Pilates Passport Membership allows members to use all of the local clubs, and virtually any club around the country. Check out their website at www.clubpilates.com, search Tysons location, stop by for a tour, or call 571.429.4890 for more information.