Collier Is Honored as Sully District Officer of the Quarter
Votes

Collier Is Honored as Sully District Officer of the Quarter 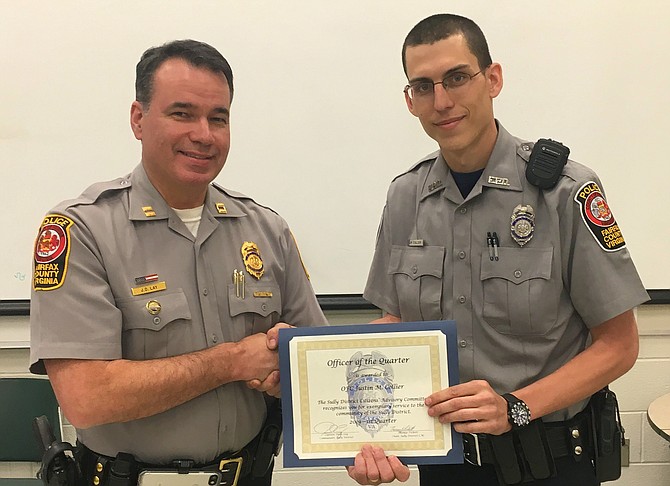 Officer Justin Collier was recently honored as the Sully District Police Station’s Officer of the Quarter for the first quarter of 2019. He was recognized at a recent meeting of the station’s Citizens Advisory Committee.

Lt. Nicholas DiPippa nominated him for the award, noting that – even though Collier just graduated from the Criminal Justice Academy in August 2018, he’s already distinguished himself on the force. “For a younger officer, Collier’s aggressive patrol tactics and his willingness to go above and beyond the basic traffic stop is exhibited in his daily work,” wrote DiPippa. “He leads his squad in traffic citations and is near the top in criminal arrests.”

In the first quarter of 2019, alone, Collier wrote 168 traffic citations and made 24 criminal arrests. DiPippa also presented an example of the “excellent work” that Collier has performed since January.

During the station’s March 7 roll call, the officers learned that Det. Brad Wrobel had obtained several warrants for a Mr. Hensta. A flyer was distributed around the station explaining the warrants against him, and it included a description of the white SUV he normally drives. Collier took note of the flyer and its information and, during his shift, he aggressively patrolled the district looking for that vehicle.

He spotted it on Route 50 near Stringfellow Road. “Collier followed the vehicle, as he believed the driver to be possibly intoxicated,” wrote DiPippa. “He also believed the driver was Hensta. Collier stopped this vehicle and quickly identified him as the driver. He quickly took Hensta into custody on the outstanding warrants, which included burglary, grand larceny, and larceny with the intent to sell.”

DiPippa said a passenger inside the SUV was also taken into custody and “possibly determined involved in other felonious crimes throughout the district. The flyer that was disseminated indicated that there could possibly be evidence inside the vehicle that would need to be collected.”

The SUV was subsequently searched, and the evidence found in it was collected and turned over to Wrobel. Even the shoes Hensta was wearing were collected, in case they could be a key piece of evidence linking him to the crimes with which he was charged.

“Without the aggressive patrolling from Collier, Hensta could still be out in the Sully District [allegedly] continuing to commit felonious crimes,” wrote DiPippa. “Officer Collier continues to make the streets and community members of Sully District safer by intensely enforcing laws. And for this reason, he is the 2019 Officer of the First Quarter for the Sully District Station.”