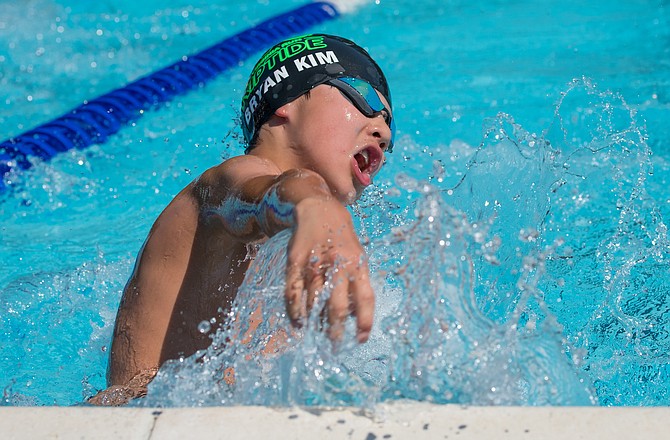 Bryan Kim turns at the wall. Photo courtesy of Chris Do

Photo courtesy of Chris Do

The Virginia Run Riptide competed in their second meet of the season against Cardinal Hill, swimming hard but losing to the Cardinals 227 to 193. Despite the loss, the Riptide earned 52 personal bests and Jackson Blansett tied the Riptide 2016 13-14 Boys 50 Meter Freestyle record with a time of 26.93.

The Riptide was ahead of Cardinal Hill 46 to 44 at the end of the Freestyle round with a sweep by the boys 8 and under swimmers Nathan Tonthat, Tyler Harris, and Mathew Kelliher, and first places finishes by Ethan O’Connor, Bryan Kim, and Jackson Blansett in the 9-10, 11-12, and 13-14 age groups. Caitlin Do swam for first for the girls 8 and under, and the Riptide had another sweep in 9-10s by Anna Kelliher, Jenna Van Buren, and Mary Schaad. Montse Garduno Estrada placed first for the 11-12s.

The Backstroke round started strong with another sweep for the 8 and under boys by Nathan Tonthat, Ernesto Garduno, and Matthew Kelliher. Nicholas Harris and Ryan Friess both took first for the 9-10s and 11-12s, and William Whitton placed first for the 13-14 group. Caitlin Do grabbed another first in the 8 and under backstroke, followed by a sweep in the 9-10s from Carson Coughlin and Caroline Friess (who tied for first place), and Mary Schaad in third.

The Riptide fell behind in the breaststroke but had strong showings by Luke Reed with first in the 11-12s, William Beamon at first in the 15-18s, and Charis Roundtree in first for the 9-10 girls.