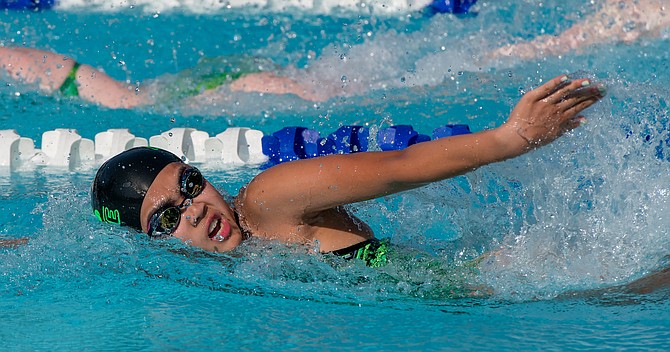 Ryan Friess swims for first in the butterfly.

The Virginia Run Riptide faced Vienna Aquatic in one of the closest meets they’ve had this season. The teams traded the lead many times and it all came down to the final relay with the Riptide winning 212 to Vienna Aquatic’s 208. Jackson Blansett also broke the boys 13-14 freestyle team record with a time of 26.46 and the Riptide swimmers earned fifty personal bests.

The Riptide led after the freestyle with Tyler Harris placing first, for the 8 and under, Ethan O’Connor taking first for the 9-10 boys, and Jackson Blansett at first for the 13-14 boys. Anna Kelliher, Caroline Friess, and Mary Schaad swept their event for the 9-10 girls, Charis Roundtree placed first in the 11-12 group, and Isabelle Cogan took first for the 13-14s as did Allison Hickey for the 15-18 girls.

After Backstroke, the score was Virginia Run: 94, Vienna Aquatic: 86. Nathan Tonthat from the 8 and under and Anna Kelliher from the 11-12 both placed first and Sarah Boyle brought home first place for the 15-18 group.

The Breaststroke turned the tide in favor of the Vienna Aquatic team, 143 to Riptide’s 127. Jenna Van Buren swam for first in the 9-10 group, as did Davis Collingsworth for the 11-12. William Whitton and Allison Nguyen earned first for the 13-14.

Going into the relays, only seven points separated the two teams. Virginia Run won the boys 8 and under free relay and the boys 9-10 medley relay. The girls 9-10 medley relay win brought the Riptide into the lead, 192 to 188, and the boys 11-12 team and the 13-14 girls’ team both won. The Riptide boys mixed-age free relay team won in a nail-biter of a race bringing the score before the final relay to Virginia Run: 207, Vienna Aquatic: 208. The girls mixed-age free relay team won the race giving the Riptide a meet win over Vienna Aquatic.