Emotional Riptide send-off for the seniors. 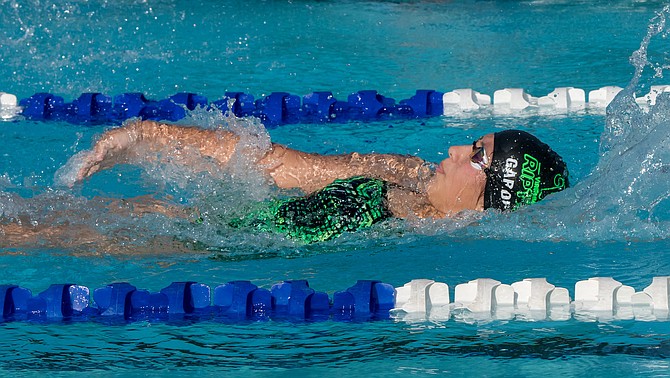 The Virginia Run Riptide ended its regular season with a home meet against the Oakton Otters on Saturday. The meet was close, forty-four personal bests were achieved, Charis Roundtree lowered her 9-10 girls butterfly record to 15.36, and the team honored their senior swimmers.

The score after freestyle was a close 48-42 in favor of the Riptide. In backstroke the 8 and under had Nathan Tonthat taking first, Nicholas Harris took first place for the 9-10s while the 9-10 girls brought home another sweep with Anna Kelliher, Carson Coughlin, and Caroline Friess. Davis Collinsworth took first as did Montse Garduno Estrada in the 11-12s. Chelsea Nguyen placed first for the 15-18 group.

Heading into breaststroke, the score was 100 to 80 in favor of the Riptide. Angela Thomson earned first for the 11-12s. The 13-14 boys dominated with a sweep by Jackson Blansett, Nathan Ryman, and Sam Roundtree and Allison Hickey placed first for the 15-18 group.

The Otters pulled ahead after breaststroke with a score of 137 to 133. The fly round saw Caitlin Do placed first for the 8-and-unders, with Charis Roundtree, Caroline Friess, and Anna Kelliher sweeping the 9-10 race, Jackson Blansett took home first for the 13-14s and Sarah Boyle earned first for the 15-18 group.