New Bulwark Against Flooding in Huntington 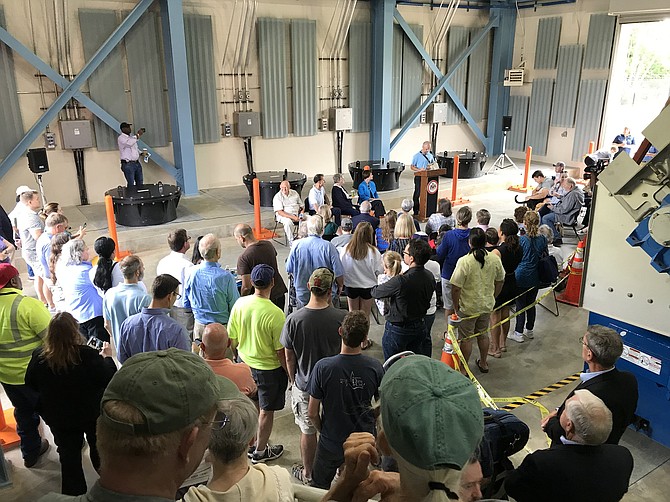 A crowd of residents attend the June 15 ribbon-cutting for the completion of the Huntington Levee. Photo Courtesy of Camela Speer

The $40 million project included the construction of the new levee and pumping station.

The project included the renovation of nearby Farrington Park and playground.

Mount Vernon District Supervisor Dan Storck with Alan Ruof and Elaine Butkiewicz, who were honored for their work to educate not only the Huntington community about the public works project process, but also all of Fairfax County as to the importance of supporting the bond referendum to construct the levee. 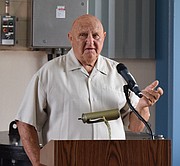 Approximately 150 community members, local businesses, elected officials and county leaders came together on Saturday, June 15, to celebrate the completion of the Huntington Levee and improvements to Farrington Park.

Mount Vernon District Supervisor Dan Storck welcomed those assembled and thanked former Mount Vernon District Supervisor Gerry Hyland for his perseverance in getting this project planned, funded and built to protect the Huntington neighborhood which, historically, has been susceptible to flash flooding from heavy rainfall upstream and tidal surges from the Potomac River.

Many Huntington residents attended and stated that they are pleased to no longer have to worry about flooding in their homes and streets. One resident reported savings of approximately $2,000 for her annual flood insurance bill as a direct result of the completion of the levee.

Community members also recognized two of their own — Alan Ruof and Elaine Butkiewicz — for their vigilance and activism to educate not only the Huntington community about the public works project process, but also the whole of Fairfax County as to the importance of supporting the bond referendum to construct the levee. In 2012, Fairfax County residents voted to approve a $30 million bond measure to build the levee to protect this neighborhood from future flooding.

The Huntington Levee is 2,800 feet long and runs parallel to Cameron Run. The levee and drainage system have been designed to protect the community from storms up to and including 100-year flooding events — floods that have a one percent chance of occurring in any given year. The $40 million project included the construction of the new levee and pumping station, the construction of 4,800 feet of recreational trails, and the renovation of nearby Farrington Park and playground. Planning and design began in 2013, and construction activities began in February 2017.

Mount Vernon District Supervisor Storck emphasized the county’s $40 million investment to make the Huntington community safer, stronger and more resilient. He said, “This project allowed residents of a moderate-income neighborhood to stay in their homes and continue to live in Fairfax County. In addition, the community got a new mile-long trail that parallels Cameron Run, connecting housing complexes like Riverside, Midtown Condos and The Parker, and advancing my mission to connect more communities to increased transportation and recreation opportunities. It is my goal to ultimately connect this trail all the way from Telegraph Road to Richmond Highway, Old Town Alexandria and the Woodrow Wilson Bridge.”

Former Mount Vernon District Supervisor Gerry Hyland thanked the community and the county, saying, “I am so proud of the voters in Fairfax County and the Board of Supervisors who supported the bond referendum to protect this area from flooding and allow these moderate income families to remain in this community and not lose their homes. Fairfax takes care of its own.”

Fairfax County Board Chairman Sharon Bulova said, “The Huntington Levee says something about our Fairfax County community. The $30 million Bond Referendum was overwhelmingly supported by voters throughout our large county. They saw it as the fair and responsible thing to do for their neighbors in a relatively small section of the county. They cared. Residents of Huntington will now be able to sleep peacefully through a rainy night.”

The $40 million project was managed by the Fairfax County Department of Public Works and Environmental Services. Arcadis U.S. designed the levee and managed the federal, state, and county permitting requirements, and Archer-Western Contractors built the levee.

The 2,800-foot-long levee is an earthen embankment that is 6 to 11 feet tall and topped with a four-foot high concrete I-wall. The width of the base ranges from 43 to 68 feet, depending on the height of the levee.

The levee is 13 feet wide at the top of the embankment and includes an eight-foot wide asphalt trail. A new pumping station was constructed.

Concrete channels and a vegetated swale divert water from the ponding area behind the levee to the pumping station. The project included the construction of approximately 4,800 feet of recreational trails and the renovation of nearby Farrington Park.

For more information about the project, visit www.fairfaxcounty.gov/publicworks/huntington-levee.