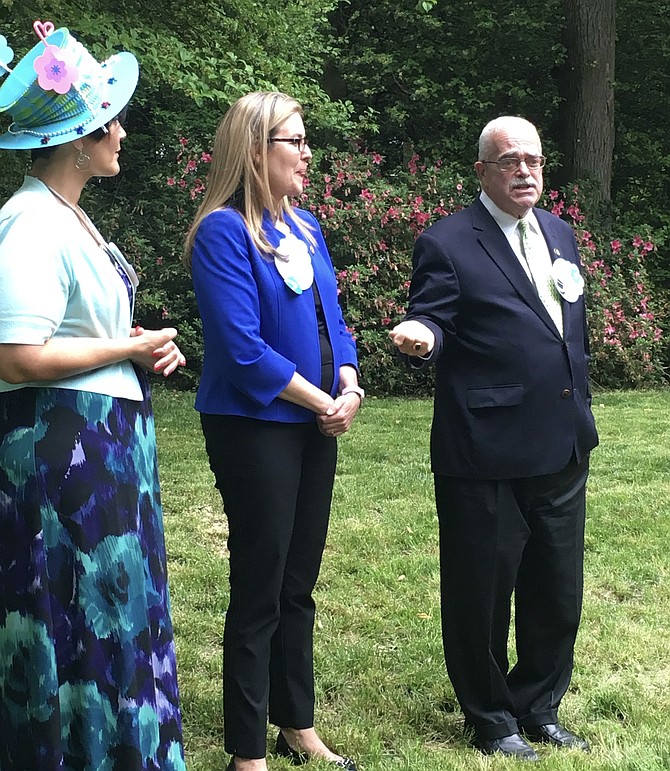 U.S. Rep. Gerry Connolly (D-11) (right), introduced U.S. Rep. Jennifer Wexton (D-10), saying he had asked her to run for Congress by being a little less than straightforward about how many weekends and evenings she would have to give up. Wexton in turn introduced Hala Ayala (left). Photo by Eden Brown.

The party featured typical English garden tea party fare made by the women who hosted the party.

Women and men from Arlington, Vienna, McLean, and other northern Virginia communities came together on Saturday, May 11 to attend a “Mad Hatter’s Tea Party” to raise money for Del. Hala Ayala (D-51), a candidate for reelection from Prince William County.

Ayala is a lifelong Virginian, a resident of Prince William County for over 35 years, and a cyber security expert for the federal government. Fighting for the rights of women and families has been Hala Ayala’s focus for many years. She has been an advocate for health care, passage of the ERA, rights for people with disabilities, fair housing policy, and better support for working mothers. U.S. Representatives Gerry Connolly and Jennifer Wexton along with U.S. Sen. Mark Warner have endorsed Ayala in her reelection bid. For more about Ayala, see www.ayalafordelegate.com or to see any state delegate’s voting record, see www.billtrack50.com.