Voters have variety of choices at primary and School Board caucus. 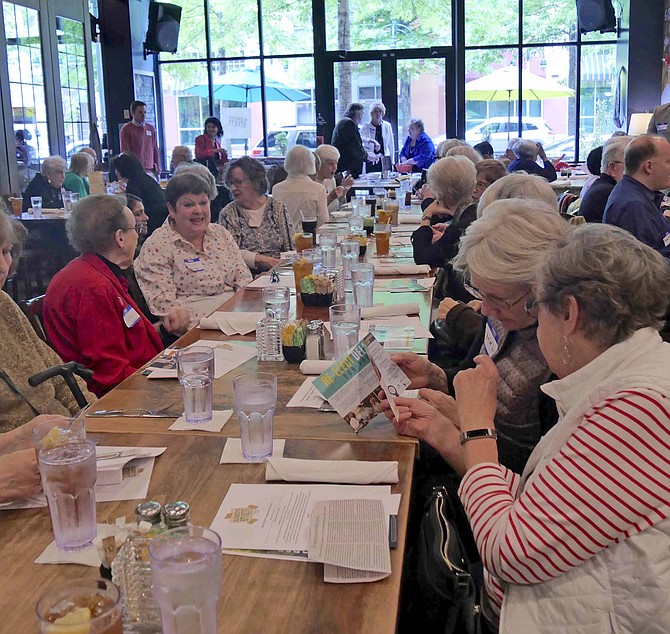 The audience at the Arlington Senior Democrats Candidate Forum on May 14.

The Arlington Senior Democrats held a forum May 14 at Busboys and Poets, featuring the candidates who face a contested primary election on June 11 as well as the candidates for School Board who face a Democratic caucus on June 4, 6, or 8.

Characterizes herself as a pragmatic progressive running for her third term in the Senate after 13 years on the Arlington County Board. Favola comments she has passed over 40 bills in the State Senate "and that's with Republican control of the House of Delegates and Senate." She says she tries to define the problems together with Republicans when possible. Among her priorities are a health bill she introduced last session to require every health care plan to include certain care such as maternal care and prescription drugs. "I had a debt free community college bill that got a lot of attention." In addition, Favola received the energy freedom award from the Sierra Club for her work to make solar power a reality. She worked to get teachers a 5 percent pay raise and to change the truancy laws. "That's the flavor of who I am."

Grew up here in Arlington, K-12. "A lot of different life events pull people to public service and mine was 9-11." She explains she got involved in economic development in Georgia and came back here to serve business development districts, to work to have less taxpayer funds and more private. She says she joined her local civic association to improve sidewalks, access to the Metro, then to become a member of the Arlington Economic Development Commission. Merlene says a lot of what the county can do is limited. "We need to give them the authority. At the end of the day it is important to know I have on the ground policy experience on how policy impacts your day." She says at the top of her list of priorities is ethics reform. "All of my work is bipartisan."

Came up through the Arlington Democrats "that leaves no one behind." In his 8 years in the state legislature he points out he has been patron or co-patron of 115 bills signed into law from tenant protection to small business. "I'm very concerned about health and wellness and social injustices." One of his proudest achievements was passage of the Medicaid expansion that reached 400,000 Virginians and more than 5,600 in the community. He mentions endorsements from firefighters and Arlington teachers where he helped raise teacher salaries and supported increased funding for schools and early childhood education. Lopez says his policy is about helping people. Engaging with every group every day is important. With over 100 languages spoken in his district, with over 40 at Wakefield High School, "it is the most diverse in our state, and the 49th District is what's best about Virginia."

Spain is a retired Marine Corps veteran who believes in uplifting the community and fighting injustice and inequality. He has lived in the Penrose District of Arlington for 10 years. Phillips says Spain advocates for diversity, not only in languages but also in race and culture in local government. She points out it's not only what happens in the state legislature but also in your backyard, as an example if your street light is out. Among his other priorities are to protect the rights of everyone and invest in affordable housing and education. Phillips adds Spain is very concerned about health and wellness and social injustices.

Knocking on doors for the last several months, Stamos says she has found almost every door unlocked "that is a feature of our community." Stamos points out the jail population is at an all time low and that she has worked on innovation and reform during her last two terms as Commonwealth's Attorney. "We didn't have a drug court.” She points to her efforts to establish Second Chance, a program that has allowed 500 youth to avoid prosecution. In addition, she cites her efforts working with other law enforcement officials on the opioid epidemic to establish the new Operation Safe Station program, which allows a person to turn in drugs 24/7 as long as he agrees to be connected to treatment. She points to the restorative justice program that has been in the Arlington schools for 31 years. Stamos says she doesn't support prosecuting for marijuana possession but she took an oath of office and until things change she will uphold the law.

Parisa Dehghani-Tafti opens by citing the May 12 Washington Post endorsement where the Post asked both candidates three questions: if she has the right skills, if she has the right vision and will she continue to keep us safe. The Post endorsed Dehghani-Tafti. She says she has practiced from the state administrative court to the Supreme Court. She asks the question why other jurisdictions have policies like cash bail and mental health courts and Arlington doesn't. "We need to stop treating poverty like a crime and end cash bail now." She says the recidivism rate has gone down in Fairfax from 34-13 percent with their restorative justice program, which is “actual steps, a different system than the apology approach we have in Arlington.” Dehghani-Tafti says she is concerned with youths with specific health problems who come into contact with the court system and the need for evidence-based programs to address these interactions. She says we should be prosecuting what the community is concerned with like violent offenses instead of marijuana possession. She concludes the Commonwealth Attorney yields enormous power so voters should pay close attention.

Goldstein has been on the Arlington School Board since 2016 and Board Chairman since July 2018. Edwards points out that there are lots of reasons to support Goldstein including his 25 years plus of civic and school engagement, his transparency and interactions with students and teachers. "His commitment has produced remarkable achievements."

Priddy grew up in Arlington, is an alumnus of Wakefield and states one of the reasons that brought him back from L.A. is the Arlington school system. Priddy says he is currently a stay-at-home dad so the family could put his wife's job first. Priddy says he spent 12 years running a construction company dealing with labor unions and operations, "and I have vision. I believe in equity, to give the right tools to create a learning environment for each kid. Second is the need to plan for the capacity crisis, and third transparency is a key value.”

Although School Board candidates run as independents on the ballot, they may be endorsed by local political parties. The Arlington County Democratic Committee (ACDC) will hold a caucus to select between Reid Goldstein (incumbent) and David Priddy in early June over a three-day period. This caucus event is not conducted by the Arlington Office of Elections.

The Democratic Caucus for School Board will be held Tuesday, June 4 from 7-9 p.m. at Drew Model School, Thursday, June 6 from 7-9 p.m. at Key Elementary School and Saturday, June 8 from 11 a.m.-7 p.m. at the recently renamed Washington-Liberty High School. Election day is June 11 with absentee ballots available.