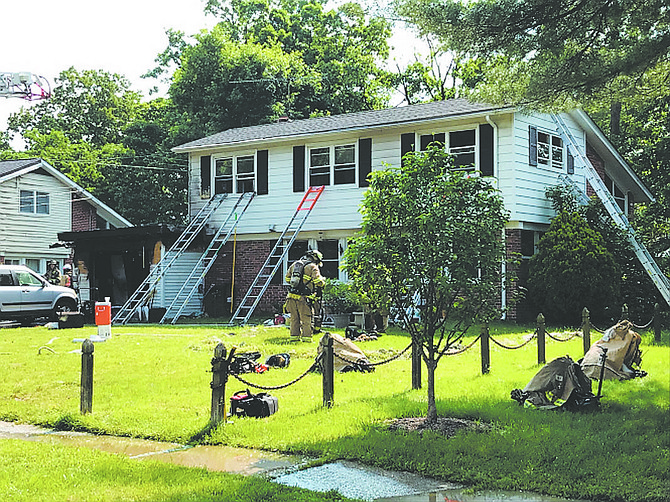 Fire Investigators determined that the fire was accidental in nature and started in a bedroom adjacent to the garage. Photo courtesy of Fairfax County Fire and Rescue

On Thursday, May 16, at 8:57 a.m., units from Fairfax County Fire and Rescue and the City of Alexandria Fire Department were dispatched for a reported house fire in the 5500 block of Sheldon Drive in the Springfield area of Fairfax County.

Units arrived on scene of a two-story, single family home with fire showing from an attached garage. The fire extended into the living area of the home. Crews worked quickly to extinguish the fire. There were no reported civilian or firefighter injuries.

One occupant was home at the time of the fire. The occupant discovered the fire and self-evacuated prior to fire department arrival. There were smoke alarms in the home; however, they did not work as they did not have batteries.

Fire Investigators determined that the fire was accidental in nature and started in a bedroom adjacent to the garage. The cause of the fire was an overloaded circuit which caused high resistant heating in the electrical wiring.

Four occupants were displaced because of the fire. Red Cross assistance was offered and accepted. Damages as a result of the fire were approximately $73,750.