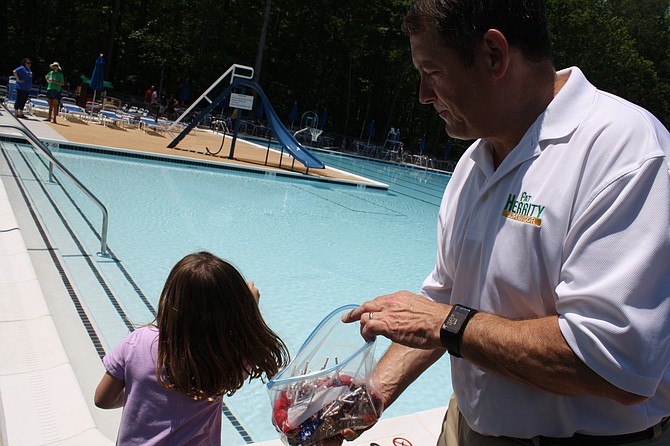 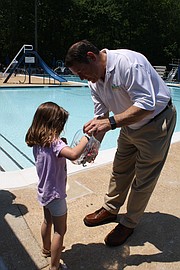 an open house, where parents paid dues and caught up on neighborhood news while the children played games and checked out the new basketball hoop that was installed this year. No swimming until the actual opening on Memorial Day weekend, but everyone was enthusiastic nonetheless.

Supervisor Pat Herrity (R-Springfield) stopped in for a visit with his signature bag of Tootsie Pops for anyone that wanted one. Herrity grew up around pools and was a lifeguard at Village West Pool in Springfield when he was a teenager.

“Pools are such a big part of the community,” he said. “Anytime you can bring people together in an informal setting like this is a good thing,” he added.

In addition to the new basketball hoop, Fox Hunt got a new pool deck and lightning protection that are now required by pools. Herrity helped the pool staff navigate the county regulation system. The pool dates back to 1972 when such a regulation was not in place, but now they’re compliant.

The Fox Hunt Pool and Tennis Club is located off Huntsman Boulevard back in the outer edge of the community near the woods. Membership is not restricted to the surrounding community, so the pool has residents from Springfield, Burke, Fairfax Station and a few other outlying areas. Like other pools in the area, the membership has gone down in recent years, but now it is back up and Craig Mosford attributed it to the good board that runs the pool.

“This allows kids to get away from the computer games,” Herrity said.

The foosball action was for real though. Under the roof by the snack bar called the “Fox Den,” Max Borlik, 11, and Gavin Langenfeld, 11, were old pros at the foosball table. A couple of younger kids stood by watching, waiting for their turn to play. Max shared his secret. “Just spin it fast,” he said.