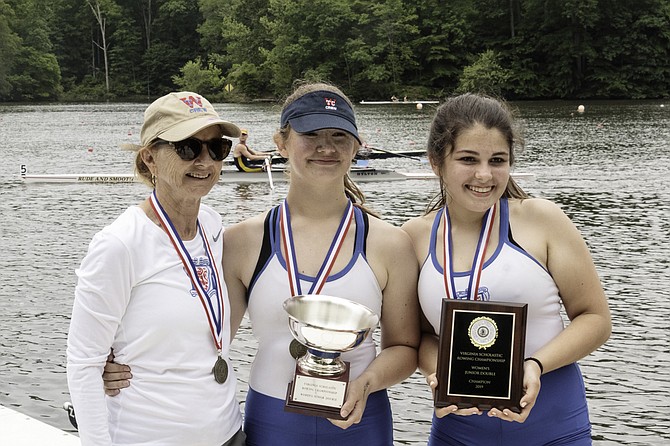 T.C. Williams upper boats took home two gold medals and a silver in the upper boats portion of the Virginia Scholastic Rowing Association (VASRA) state championships on the weekend of May 11-12. It was the last race of the high school crew career for rowers who are graduating seniors. The weekend’s results clinched the overall points trophy for the state championship.

Racing on an unseasonably chilly day at Occoquan in the VASRA’s championship, the men’s junior four and women’s junior double won gold, as the women’s 1V eight, racing in the 2V category, won a silver medal.

T.C. Williams made a tough call just before the race, so that the women’s 1V boat raced in the 2V category, and the 2V raced in the 1V category, where it advanced to the final. The girl’s team ultimately took the points trophy with the strategy.

“State championships were definitely a challenge for our varsity team across all the boats, 1V, 2V and lightweight eight. We all went into categories we hadn’t previously raced in,” said Paula Filios, coxswain of the 1V, and a graduating senior. (The lightweight eight’s took gold previously, racing in the junior varsity category, due to a lack of boats in the league to make up an entire category.) “It was definitely a plus to have come away with the girls points trophy.”

“I learned more than I ever thought I would,” she added. “I wouldn’t have wanted to end my five years on the T.C. Williams crew team with any other group of girls; they definitely showed me their fight this year and inspired me to hold my head up high.”