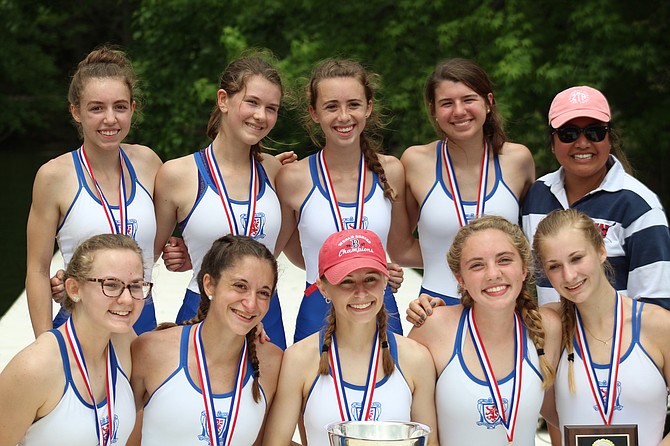 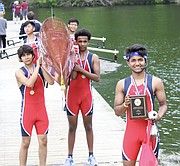 Half of T.C. Williams’ crew team took to the waters of the Occoquan River on a fine spring day Saturday, May 4, bringing home five medals, three of them gold, in part one of the state championships. Part two, in which varsity boats compete, is Saturday, May 11.

The Virginia Scholastic Rowing Association championship results determine which boats move on to regional and national competitions in the coming weeks.

On the men’s side, two four-seat T.C. Williams boats won gold: one racing in the 2V category, and one in the 3V category. The women’s lightweight eight boat, minus one regular senior, competed in the junior varsity category, winning a gold medal.

“Our race was very representative of our training, and we were all very prepared for it,” said Clare Williams, the coxswain in the men’s second varsity four. “When we had about 50 meters left … I could just tell we were going to reach the finish line first, so I started yelling and splashing the water.”

As the boat crossed the finish line, the rowers exchanged hugs.

The day’s races were held in front of a huge crowd of parents and supporters at one of the largest rowing events in the area. Lineups had changed just before the VASRA championship because there weren’t enough boats in the region to make up a lightweight category. T.C. Williams sent some of their strongest rowers to compete in new categories, a strategy that proved a winning one for the team.