Accepting Torch ‘to Hold it High’ in Great Falls
Votes

Accepting Torch ‘to Hold it High’ in Great Falls

Great Falls pays tribute to the fallen on Memorial Day. 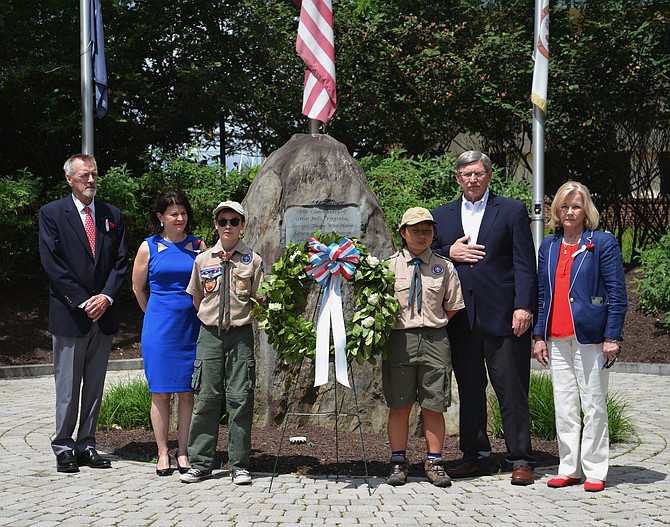 Elected officials participated in the remembrance ceremony as well. From far right, Great Falls Freedom Memorial president Andy Wilson is joined by, from left, State Sen. Barbara Favola (D-31), Dranesville Supervisor John Foust, and Del. Kathleen Murphy (D-34) to stand with Scouts Tommy Maxon and Melinda Hauda for the Laying of the Wreath at the Memorial. Photo by Andrea Worker. 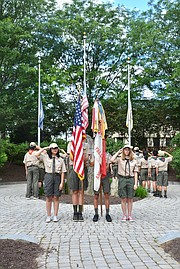 Presenting the Colors – members of Scout Troop 55 had the honor to Present the Colors at the Great Falls 2019 Memorial Day Remembrance ceremony. The Scouts led the attendees in the Pledge of Allegiance, and later performed the ceremonial Laying of the Wreath before Raising the Colors that had been lowered to half mast in honor of those who have fallen in service to the country.

Opening the ceremony with a brief history of the federal holiday which was established to observe and honor people who have died in service to the country, Wilson also explained the meaning behind the wearing of red paper poppies as part of the remembrance of the fallen.

“It was inspired by a famous poem,” said Wilson, about a battlefield, and the fallen upon it, that had seen not only tremendous bloodshed, but that had been physically damaged by one of the earliest uses of mustard gas during warfare.

“But in the midst of it all, these poppies survived, and even in the middle of battle, when there was quiet, birds, larks, could be heard singing.”

THE POEM - “In Flanders Fields” - was written at Ypres, Belgium, during World War I by Lieutenant Colonel John McCrae, following the death of his close friend and former student, Alexis Helmer, by a German shell at that battle. The day after Helmer’s death, McCrae wrote the lines describing the red poppies that bloomed all about the battlefield, despite the destruction and the carnage, and the responsibility of the survivors to accept “the torch” of duty and remembrance, for “If ye break faith with us who die, We shall not sleep, though poppies grow in Flanders fields.”

Well-attended by locals, and by elected officials including State Sen. Barbara Favola, Del. Kathleen Murphy, and Dranesville District Supervisor John Foust, the ceremony included an Invocation by Rev. David Lucey, Rector, St. Francis Episcopal Church in Great Falls, the Presentation of the Colors by local Boy Scout Troop 55 – who also led the assembly in the Pledge of Allegiance – and the singing of the National Anthem and “America the Beautiful” by Retired Air Force Senior Master Sgt. Juanita Williams before keynote speaker Sandy Pidgeon took to the podium.

Pidgeon is a Great Falls resident, the Vice President of the Great Falls Freedom Memorial and a 20-year veteran of the U.S. Navy Seal Teams.

“Honor never grows old,” Pidgeon quoted from William Bennett, former Secretary of Education under Ronald Reagan. Continuing with Bennett’s words, Pidgeon read “In our time that may mean social disapproval, public scorn, hardship, persecution, or as always, even death itself. The question remains: What is worth defending? What is worth dying for? What is worth living for?”

For Pidgeon and the many fallen he paid tribute to, those who survived, and those who continue to serve today, the answer would be the ideals on which America, “the Great Experiment” was founded.

Pidgeon’s remarks were a reminder to respect and defend those ideals and to pay less heed to “the voices and ideas of fallible men.” The former Navy Seal used his experiences in a newly-liberated Albania years ago to bring home his point that democracy, as envisioned by the founding fathers, is still the ideal to be defended.

“Freedom is not free,” he said. “We must remember that freedom is always one generation from being taken away,” and thus the need to remember and “pass the history along.”

AFTER THE KEYNOTE ADDRESS, the names of the fallen from Great Falls were read aloud by resident Calvin Follin, as Sara Hilgartner (the widow of the Freedom Memorial’s creative force Retired U.S. Marine Corps Col. Pete “High Pockets” Hilgartner) rang a bell after each name was read.

After a moving rendition of “Taps” by Sara Young, it was time for the Boy Scouts to once again perform their duties with the Laying of the Wreath of Remembrance and the Raising of the Colors.

Wilson made closing remarks and Rev. Lucey gave a parting benediction before the attendees were officially dismissed with the reminder to “remember” not just on the one day of the year.

Annual Memorial Day ceremonies like the one in Great Falls are one way to keep the faith that the fallen on the fields in Flanders pleaded for, so Wilson, the other members of the Great Falls Freedom Memorial, and the area residents continue to gather to accept the “torch…to hold it high.”