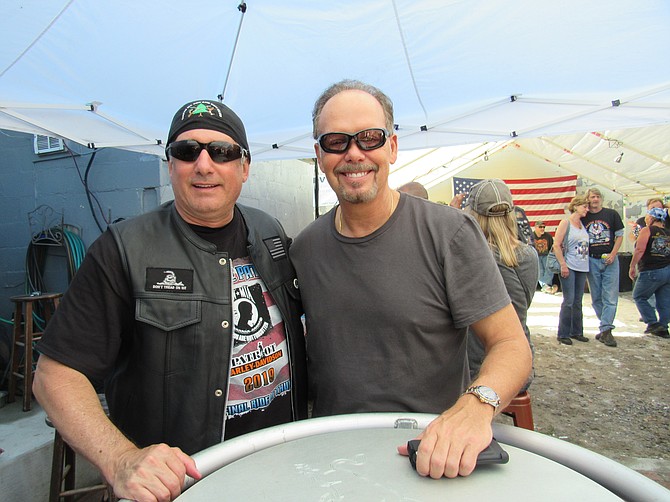 From left, United States Army Veteran Tony Jimenez of Great Falls and Air Force Veteran Barry West of Reston sit in "Jimmy's Alley," in Herndon early Sunday morning before the ride into the District to honor and remember those who fought for freedom and paid the ultimate price. Photo by Mercia Hobson. 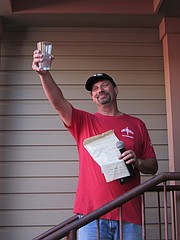 Town of Herndon Mayor Lisa C. Merkel waves good wishes to the bikers as they roar out of Herndon to join what could be Rolling Thunder's last ride through Washington, D.C.

In a small Northern Virginia town billed as "4.2 square miles of endless possibilities”, the town’s living legend and business owner, Jimmy Cirrito of Jimmy's Old Town Tavern took those possibilities to heart. He sealed a Memorial Day Sunday vow with a toast. Standing in front of a large crowd of bikers packed into his outdoor beer garden, Cirrito promised to keep his long-standing Motorcycle Rally to the nation's capital going, regardless of Rolling Thunder's announcement last fall that 2019 would be the ride's last year.

Earlier that morning, bikers roared into the Town of Herndon to attend Jimmy's Old Town Tavern 22nd Anniversary Party & Memorial Day Bash. They were there for more than the ribs, music and drinks though. Riders had converged in front of the iconic restaurant owned by Cirrito in a patriotic display to demonstrate support of Veterans who died for freedom and those service members listed as prisoners of war and missing in action. Among them were United States Army Veteran Tony Jimenez of Great Falls and Air Force Veteran Barry West of Reston. They sat in "Jimmy's Alley," early Sunday morning before the ride. According to Jimenez and West, Memorial Day was a day of remembrance for them, a special day for those service members who fought for freedom and paid the ultimate price. The back of West's t-shirt read: "Veteran – a person who wrote a blank check payable to the United States of America for an amount up to and including one's life."

"They should never be forgotten, never," said Jimenez and West simultaneously.

Cirrito stood on the steps facing the "Alley." With a history of supporting the military, Cirrito stressed that his rides would never end. "We will find a significant location and keep these rides going.” He stated that funds from merchandise sales, bike washes and general donations during his Weekend Bash would benefit Veterans at the DV Farm in New Hampshire. According to Cirrito, the nonprofit organization is dedicated to helping homeless and addicted Veterans back into civilian life.

Getting down to ride logistics and safety, Cirrito told the bikers the Herndon Police would escort them to the town limits. From there they'd roll through Great Falls, slowly down the George Washington Parkway and end at Bolivar Park in Northwest D.C. They'd regroup later in the afternoon and return to Jimmy's via White's Ferry. He'd also foot the bill for White's Ferry.

Shortly after 9 a.m., hundreds of bikers put their kickstands up. With a police escort, they roared out of Herndon, headed to the nation's capital in a patriotic tribute to American war heroes who paid the ultimate price and for a call of recognition of Prisoners of War and those Missing in Action.